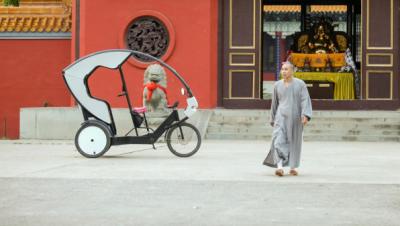 In Dhaka, Bangladesh, a growing middle class is buying a growing number of cars. Pedal-powered rickshaws, used in the city since the 1930s, are seen as old-fashioned, blamed for the city’s notoriously bad traffic jams, and banned from some streets–despite the fact that cars take up more space on roads and worsen smog.

A sleek new pedicab, aimed at Dhaka, Kathmandu, Manila, and other Asian cities, is designed to shift perceptions of a form of transportation that can be sustainable, affordable, and an important source of local jobs.

“We realized we had to give the rickshaw or the pedicab a more modern image,” says Katja Schechtner, a research fellow at MIT Senseable City Lab, who worked with a global team of designers and experts from the Asian Development Bank to create the new vehicle, called the BuddhaPedalPower.

One version of the new rickshaw uses electric power to provide “pedal assist” like an electric bicycle. For drivers living in poverty, who might subsist on a couple of bowls of rice each day, electric power makes it easier to keep going. A more affordable version lacks an electric motor, but uses the same aerodynamic, ergonomic design to minimize the amount of energy needed to pedal.

A canopy for shade doubles as ad space, helping bring in additional revenue beyond each fare. “Because the vehicles look better, they’re more attractive to advertisers,” says Lloyd Wright, a senior urban development specialist who focuses on transportation at the Asian Development Bank. Behind the driver’s seat, a panel provides some privacy–important in Bangladesh and other countries where Muslim women prefer separation from male drivers. An LCD screen in the back can display more ads and show progress on a route.

The non-electric version will likely cost around $800, and the electric version $1,500. That’s significantly less than an “autorickshaw” that runs on diesel or natural gas, which might cost $2,500 or $3,000, and less than an earlier experimental electric rickshaw created by the Asian Development Bank, which would have gone for $10,000. It’s more than a regular pedal-powered rickshaw, which can cost $450 in a place like Bangladesh. But a typical rickshaw might last only a few years before it needs to be replaced; the new vehicle is designed to last at least twice as long. While the cost would likely be far out of reach of a driver, most rickshaws in Asian cities are owned by associations and leased to drivers by the day. The team also plans to offer micropayment plans.

The team is carefully exploring how the system can integrate within existing transit ecosystems in each country, which might include Uber-like apps. “We have been working quite hard on the business models because we don’t want this to be one of these stupid things where an aid company comes in, hands out new tech, and ruins the existing market,” says Schechtner.

Since June of 2017, they have been testing more than 60 prototypes in Kathmandu and Lumbini, Nepal, gathering feedback from drivers and considering adjustments to the design. After Bradley Schroeder, a team member who was leading the implementation of the project, died unexpectedly in October, they’re now seeking someone else who can help bring the vehicles to market throughout Asia.

The response has been positive, including from politicians who could choose to support rickshaws on the road. Wright says that the design elicits “oohs and ahs,” in contrast to how rickshaws are usually seen. The older vehicles have been under attack “because of this issue of cars and perceptions in the minds of decisionmakers that somehow cars are the future and that non-motorized transport, whether walking, or bicycles, or pedicabs, is something of the past.”

Though cars have a relatively small share of the transportation mix in cities like Dhaka–perhaps 10%, versus nearly 80% in Los Angeles–they’ve already made congestion unbearable. Dhaka estimates that the city loses billions of dollars each year because people are stuck in traffic. Replacing even more rickshaws with cars will make the problem worse.

Replacing rickshaws would also destroy jobs. In Dhaka, despite restrictions on the use of the vehicles, there may be 1.1 million on roads. “Each one of the rickshaw drivers is supporting an average family size of about six people,” says Wright. “The implications in terms of economic impacts and survivability for many households is quite critical.”

As the tests in Nepal conclude and the team works to begin bringing the vehicle to cities around Asia, they also plan to share the design. The plans will be available open-source online. “We’d like to see the units manufactured everywhere,” he says.

This email address is being protected from spambots. You need JavaScript enabled to view it.

More in this category: « One Fallout From Long-Haul Battle on Airfares: No Free Checked Bag IATA Launches New Global Certification Program to Improve Safety and Welfare of Animals Travelling by Air »
back to top
Apr 05, 2018