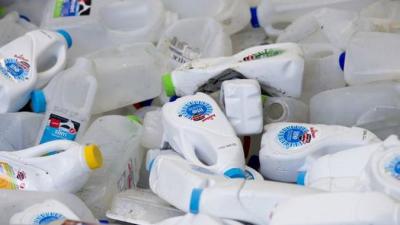 Piles of plastic are mounting around New Zealand as companies look for other destinations for the millions of tonnes of waste that China no longer wants .

But the nation's health-driven ban on 24 types of foreign waste, which kicked in last month, has forced recyclers to look for buyers elsewhere - mainly South East Asia.

The latest Customs figures showed the 2.7m kg of plastic waste material sent to China in the first quarter of 2017 had dropped to just 125,904kg over the same time this year, with the associated value falling from $1.7m to little more than $100,000.

Exports to Indonesia, Thailand and Malaysia, which received a combined 7.2m kg of plastic waste between January and March, have meanwhile surged.

The Ministry for the Environment was monitoring stockpiles of some plastic materials that had begun to appear around the country as certain types of products became harder to sell.

"Some have seen a dramatic decrease in price, so even if there are buyers for the product, recyclers won't be making as much money as they were before China's ban came into effect," Zero Waste Network executive officer Dorte Wray said.

"For example, film plastics were worth half as much as they were two months earlier."

"If you're a council, you're probably okay for now because you will have agreed on pricing in contracts with your contractor.

"But when councils come to the end of their contracts, there will likely be a difference, and recycling may become more expensive, or the revenue they get back from that will be less - it's placing a challenge on the economics of recycling."

Some grades of plastic waste collected by Wellington City Council had been temporarily stored while markets improved, but these products were now being sold overseas, although at a lower price, a spokesperson said.

In Auckland, where 70,000 tonnes of recycling picked up at kerbside had been previously shipped to China, contractor Visy was also looking for other markets.

Auckland Council waste planning manager Parul Sood said these had come with depressed prices in many instances, and the company was utilising mixed paper in its own manufacturing facilities.

In the longer term, Sood said the need for New Zealand to create its own circular economies for this material had been recognised, and the council had launched a national working group that met in November.

Evans expected New Zealand's small size would mean it would always have to ship some of its waste offshore.

More in this category: « Volvo introduces its first all-electric truck Reducing emissions by using food waste can also make money for manufacturers »
back to top
Jul 25, 2018