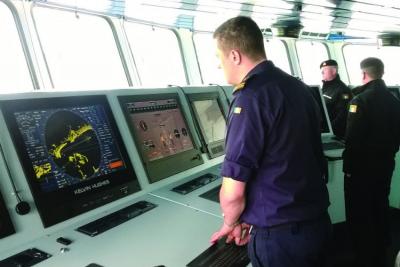 Kelvin Hughes now design and manufacture security solutions and surveillance systems for applications across land, coast and sea. Along with equipping vessels of the Royal Navy, Kelvin Hughes sells to governments, agencies and over thirty of the world’s navies, from their headquarters in Enfield.

Winning the contract to supply the Royal New Zealand Navy’s (RNZN) new Maritime Sustainment Capability vessel HMNZS Aotearoa – an ice-capable tanker designed to replenish other ships at sea with fuel and water – with an Integrated Navigation Bridge System (INBS), was made possible with the support of UK Export Finance.

The RNZN required an Advance Payment Guarantee from Kelvin Hughes’s bank which was not possible within their existing financial arrangements. Under its Bond Support Scheme UKEF provided Santander with a guarantee for 80% of the value of the Advance Payment Guarantee within only three weeks, helping Kelvin Hughes win the contract and demonstrate its position as a leading provider of navigation systems.

Equipped with Kelvin Hughes’s state of the art Integrated Navigation Bridge System, the Aotearoa will be the largest ship ever operated by the RNZN, costing $493 million. It will be constructed at the Ulsan Shipyard in South Korea by Hyundai Heavy Industries and will be inducted into the RNZN in 2019/20.

David Millard, finance director at Kelvin Hughes said: “Our experience with UKEF has been fantastic. Their process was very straightforward, and we couldn’t believe the range of support it offers.

“Having our financial package in place with the bond support guarantee that we received from UKEF gave us the competitive edge that we needed to win this contract. We could not have done it without UKEF.”

“In 2017-18, UKEF provided exporters based in the South-East with nearly £30 million of support, resulting in around £145 million worth of overseas sales, and I am delighted that our offer of financing proved so instrumental in Kelvin Hughes’s success.”