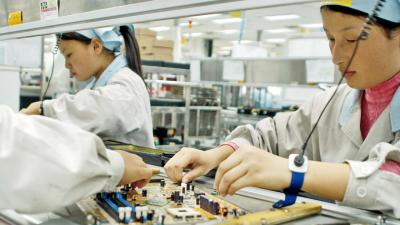 With U.S. levies on $200 billion of Chinese products set to balloon to 25% in 2019, companies on the mainland making everything from car parts to cameras are lining up other production facilities across Southeast Asia reports Angus Whitley for IndustryWeek.

Ayala Corp., the Philippines’ oldest conglomerate, is in talks to provide land to a Chinese company planning to build one of the world’s biggest tire factories to sidestep U.S. duties, Ayala Chairman and Chief Executive Officer Jaime Augusto Zobel said in an interview Tuesday at Bloomberg’s New Economy Forum in Singapore.

Fujifilm Holdings Corp., which makes its popular Instax cameras near Shanghai, said it may shift that process to Thailand or the Philippines “if the situation is going to be really serious.”

Interviews with regional business chiefs indicate major -- and potentially permanent -- changes to supply chains are taking place because of the economic dispute. Even if President Donald Trump reaches an accord with President Xi Jinping in coming weeks, the diversion of Chinese manufacturing may be irreversible, partly because tensions could flare up again, some leaders say.

“Nobody’s running away from exporting to the U.S. or losing share,” said Francisco Aristeguieta, chief executive officer of Citigroup Inc.’s Asia unit. “What they’re very active in doing, however, is assessing their supply chains. One of the things they believe is that the genie is not going back into this bottle.”

Lower-level manufacturing in China is attracting less investment and that process is being accelerated because of the trade dispute, Kerry Logistics Network Ltd. Chairman George Yeo said in an interview at the New Economy Forum.

About a third of more than 430 American companies in China are considering moving production out of China, according to a survey in August and September.

“On the electronics side, we’ve had a number of companies both from Taiwan, China looking to start manufacturing in the Philippines for the global market to get out of that tariff cycle,” said Ayala’s Zobel.

More in this category: « Brexit trade minister reveals UK is set to SECURE trade deals that WILL replace EU trade Barefoot and empowered: NZ’s link to solar grandmas »
back to top
May 02, 2018