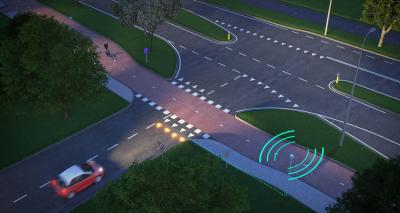 Simon Dyne General Manager Regional Business North Island, says that emphasis on new technologies is important for developing our future roads, which will need to meet the needs of diverse road users following a number of major incidents involving trucks and cyclists on New Zealand roads over the past two years.

“As a company, we want to prevent unnecessary deaths or injuries on our roads. We want our people, and every road user they interact with, to return home safely every day,” Mr Dyne says.

Fulton Hogan has also joined forces with Dutch company, Heijmans, who have developed a product called Bikescout. By using radar technology and LED indicators in the road surface, Bikescout helps improve the safety of cyclists by warning drivers when cyclists are approaching and how fast they are travelling.

Fulton Hogan is currently testing Bikescout on Hutt Road in Wellington. It has been installed near a two-way cycle lane in front of a Caltex Station. The high traffic volume and speed that road users are travelling in this area creates a high risk zone for cyclists.

“The roads within the communities we work in require new technologies that promote the safety of all road users. We are looking for further opportunities to utilise the capabilities of Bikescout within New Zealand and Australia.”

Decisions on how cycle ways, footpaths and shared use paths are incorporated into a road or bridge project are determined by New Zealand Transport Agency (NZTA).

Fulton Hogan is currently trialling a new safety measure on the Papanui Parallel cycle project. The company has retrofitted one of their trucks with a 360 degree camera and side rails to help prevent the risk of cyclists going under the vehicle. These features increase the safety of both the cyclists and truck drivers using the road.

In Auckland, Fulton Hogan constructed the Onehunga Foreshore Bridge, which includes a shared path for pedestrians and cyclists. This project provides the Onehunga community with safe access to new coastal parkland, beaches, a new recreational loop, and the Waikaraka cycleway.

Incorporation of separate cycleway infrastructure has been involved in many Fulton Hogan projects such as shared use pedestrian and cycle paths on the Tauranga Eastern Link, the Waikato Expressway, the Christchurch Southern Motorway, and the SH16 Lincoln Road Interchange which also included an extension and improvements to the North-western cycleway.

“Evidence suggests that successful transport networks incorporate a number of modes operating as seamlessly as possible. As road builders for more than 80 years, we are excited to be involved in exploring new frontiers for bike safe design and construction,” Mr Dyne says.

More in this category: « Your country needs you to pick up a hammer Big Construction Tour introduces students to construction careers »
back to top
Jun 06, 2018