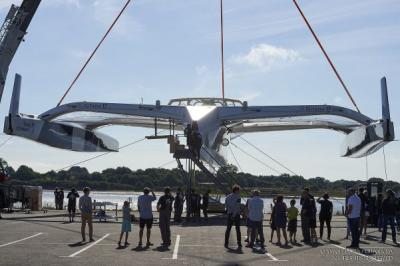 The most radical of the new Ultime trimarans, the incredible Gitana 17 is designed to foil at over 50 knots and cross up to 900 miles a day, crewed by just one solo skipper. Elaine Bunting talked to designer Guillaume Verdier at the launch

A revolutionary 100ft fully foiling oceangoing trimaran capable of covering more than 900 miles in a day and sailing at speeds of 50 knots was launched in Lorient this week. Designed by Guillaume Verdier, the foil genius behind the America’s Cup winning Emirates Team New Zealand, Gitana 17 is designed to be sailed solo and to beat the round the world record.

Gitana 17 is the latest of the race boats backed by Baron Benjamin de Rothschild. The 100ft ‘Ultime’ trimaran is the culmination of three years of work by the team and brings together developments from areas as diverse as the Vendée Globe IMOCA 60s, the America’s Cup and the MOD70 trimarans.

This is a beast of a boat and significantly different from others in the growing ‘Ultime’ development class such as François Gabart’s Macif and Thomas Coville’s Sodebo. For the first time, this is a boat designed around foil performance.

According to the design team, Gitana 17 will be able to foil at speeds of 48-50 knots in 16-25 knots of true wind and seas of 6-8m – typical Atlantic conditions. It could also sail across the Southern Ocean in non-foiling mode at up to 40 knots.

“Foiling is not that [hard] but to do that and be stable in waves is a lot more difficult and this is a first stage to doing that,” explained Guillaume Verdier. “Previously the boats were designed to go offshore and slowly the foils got into that, but we have designed the appendages as a principal [part] and tried to have a platform that goes well with that.

“It makes a boat that is a little heavier because there are more systems to control the foil, more hydraulics and the platform is stiffer in torsion.”

The foils on Gitana 17 share some common thinking with those on the America’s Cup boats – the outer float foils are an L-shape. The main daggerboard on the central hull, however, is a shape never seen before on these boats and features a large horizontal component to help with roll control.

More in this category: « How Kiwi tech helped Team NZ bring the America’s Cup home For the do-it-yourselver flatpacked boats now a reality - a boat in a box »
back to top
Aug 30, 2018