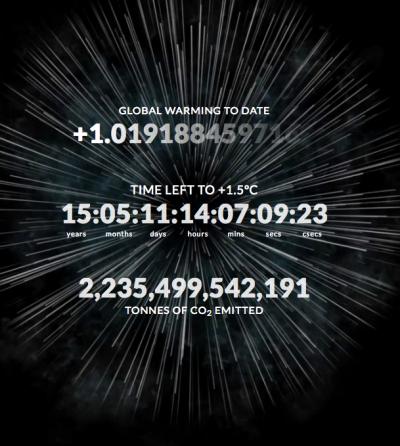 Nov 14 2017  -  Human-induced global warming is happening faster than ever and accelerating, according to a new measurement index developed by an international team that includes the Director of Victoria University of Wellington’s New Zealand Climate Change Research Institute, Professor Dave Frame.

The researchers’ real-time Global Warming Index will be updated continuously on the website www.globalwarmingindex.org and provides improved scientific context for temperature stabilisation targets, with the potential to reduce climate policy volatility.

The index and its data have been announced in a paper for the Nature research journal Scientific Reports.

Warming exceeded 1°C above mid-nineteenth-century levels in 2017 and is increasing at a rate that leaves little time to achieve the goals of the Paris Climate Agreement, say the researchers.

“Global temperatures may be pushed up temporarily by El Niño events or down by volcanic eruptions,” says Dr Karsten Haustein from the University of Oxford in the United Kingdom, lead author of the paper. “We combine temperature observations with measurements of drivers of climate change to provide an up-to-date estimate of the contribution of human influence to global warming.”

The level of human-induced warming reached 1.02°C above the average for 1850–79 in November 2017 (with a 5-95 percent uncertainty range of 0.89–1.20°C) based on the HadCRUT4 temperature dataset from the UK Met Office, or 1.08°C when estimated using a version of HadCRUT4 that interpolates over poorly sampled regions such as the Arctic.

“This Global Warming Index has been increasing continuously since the nineteenth century, with no pause in recent decades,” says Dr Haustein. “It has risen at a rate of 0.16°C per decade over the past 20 years, and is expected to average 0.96°C above 1850–79 for the decade 2010–2019. Worryingly, it appears to be accelerating, despite the recent slowdown in carbon dioxide emissions, because of trends in other climate pollutants, notably methane.”

Professor Frame says: “A robust, continuously updated index of human-induced warming— the only component of global temperatures we have any control over—is essential to monitor progress toward meeting temperature goals. We hope the Global Warming Index will provide this essential information to the United Nations Framework Convention on Climate Change [UNFCCC] process.

“Using our index, as well as www.climateclock.net, in conjunction with carbon budget estimates based on current emissions, the remaining time until we cross the anthropogenic warming target of 1.5°C or 2°C can be monitored continuously.”

Paper co-author Professor Myles Allen, also from the University of Oxford, presented the team’s findings to delegates of the UNFCCC conference in Bonn, Germany, on Monday 13 November, at a UN Side Event sponsored by Victoria University of Wellington, in partnership with the Universities of Oxford and Reading and Norway’s CICERO Center for International Climate Research.

More in this category: « Even more leading businesses commit to shaping a clean economy Fonterra Launches Plan to Improve Waterways »
back to top
Jun 05, 2018