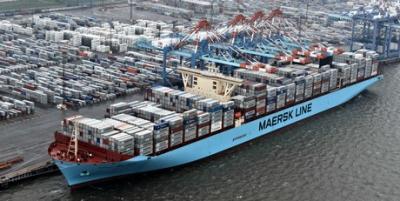 In June 2017, the terminal of APM in Rotterdam was inactive for a few days due to a cyber attack. Parent company A.P. Moller-Maersk’s systems were also down for a few days because of the digital attack. The Danish shipping company lost 250 to 300 million dollar as a result, according to the annual report of 2017. Despite this, the company’s turnover increased compared to the previous year.

Below the line, the total result was in the red. The company recorded a loss of 1,164 million dollar, primarily as a result of worse performances by the APM Terminals and Damco divisions. For these divisions a loss was recorded. The underlying result, an accounting calculation in which the once-only costs and profits are excluded, does result in positive figures. Looking at this entry, the group records a profit of 356 million dollar. This is mostly a result of a better performance by Maersk Line, which makes a profit after loss-making year 2016. A negative impact was also recorded, and the cyber attack during the third quarter was seen in the results. Besides, interest costs increased, and fluctuations in exchange rates had a negative influence on results.

Millions lost after cyber attackIn June, the company was struck by a cyber attack by the NotPetya malware. This malware damaged systems of multiple companies throughout the world, and also brought systems of Maersk Line and APM Terminals to a standstill. “We quickly recovered, but A.P.Moller-Maersk suffered a loss between 250 and 300 million dollar in a short period,” according to the shipping company in the annual report. Looking back, it took a week after the malware infiltrated Maersk’s network before the first positive reports appeared. “The recovery of the systems is going well,” Maersk Line’s website reported on 3 July, a week after the attack. The first important applications were online again, and the system was once again stable. E-mail traffic could also be resumed. A complete recovery of the systems would take several days.

It’s not surprising Maersk mentions a cyber attack as an operational risk with a relatively high probability in its annual report. The recovery of the systems came at a steep cost. The company has now taken several initiatives to improve safety of the digital environment and IT structures.

Takeover Hamburg Süd increases market shareIn November, the takeover of Hamburg Süd, which was announced in December 2016, was finalised. Since then, integration of the shipping company within Maersk has been worked on. The company hopes to be able to profit of synergies among the shipping companies, but doesn’t turn a blind eye to the possible risks of this integration. For now, volumes and the Hamburg Süd brand are maintained.The integration should be finalised this year.

“By combining the strengths of the two companies, customers will get better and more extensive service with a better market coverage, direct services and other benefits of a global network,” according to Maersk in its annual report. The rich history and ‘proud legacy’ of the two shipping companies is also mentioned. Due to the takeover, Maersk Line’s market share increases by about 19 per cent, and capacity now amounts to 4.1 million TEU. The takeover will mostly increase presence on the North-South routes, and is also expected to lead to an increase for APM Terminals.

The Danish shipping company had 282,000 reefer containers at its disposal, and 83,250 reefers from Hamburg Süd are now added to that. In total, the fleet of the combined shipping companies consists of 786 boats, including owned boats and chartered ones. Maersk’s share in this is 680 boats, Hamburg Süd has the remaining 106 boats in its fleet.

Positive signs, further consolidationAlthough the container market gave off positive signs after a weak 2016, it continues to be a challenging market with a surplus in capacity on a global fleet. The sector responds to this continuous overcapacity with further consolidation. COSCO made a bid on OOCL, A.P. Moller-Maersk acquired Hamburg Süd, and UASC and Hapag Lloyd wrapped up their merger in 2017. Besides, Japanese shipping companies NYK, K Line and MOL are still working on a joint venture, which is expected to be presented this year.

Because of the wave of takeovers, which started with the merger of Hapag Lloyd and CSAV in 2014, a larger part of the market is concentrated in a smaller group of shipping companies. While the five largest shipping companies controlled 45 per cent of the market in 2014, this share will increase to 64 per cent after the merger of COSCO and OOCL and the Japanese joint venture.

For the future, the Danish shipping company is looking towards the parcel services such as DHL, UPS and FedEx, and uses that sector as an example. “Within three to five years, it should be just as easy to ship a container across the world as it is for consumers to ship a parcel using one of the parcel services nowadays.” To achieve that goal, the company wants to digitise even more, and thus change the container market.

Container market growing, shipping companies order more boatsDemand for containers increased by five per cent last year. That increase was mostly visible in the first three quarters of the year. This growth levelled off in the final quarter. The strong growth figures are partially a recovery after the weak first months of 2016. Besides, it’s going better economically all over the world. Demand for containers on the East-West route was stable last year. Larger import demand from the US and a strong growth in that country boosted that demand. European import also showed a rising line as a result of the better economic climate.

On the North-South routes, some regions in South America and Africa in particular showed a considerable growth. This development reflects an economic stabilisation in countries such as Brazil, Argentina and Nigeria, although this followed several years in which a decline was noted. The Chinese import was on the rise during the first quarter of 2017, but levelled off in the second half of the year. The import followed the general trend of the Chinese economy because of that. Besides, stricter contamination regulations in Northern China and a restriction on the import of rubbish and waste material negatively influenced import figures.

A global container capacity of 21 million TEU was available at the end of last year. That is 3.1 per cent more than a year earlier. As in previous years, newly built boats were dominated by large ships of more than 10,000 TEU. At the beginning of the year in particular, boats were also taken out of use. In total, 427,000 TEU, over 161 boats, was taken out of use.

Last year, more boats sailed the oceans. In 2016, 6.9 per cent of global capacity was idle, last year this was only 1.8 per cent. During the first half of last year, shipping companies placed considerably more orders for new boats. In total, 107 new boats were ordered, good for 671,000 TEU.

More in this category: « Mainfreight celebrating 40 years Foodstuffs partners with local and global experts for supply chain excellence »
back to top
Aug 17, 2018