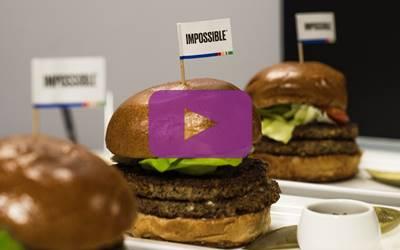 The airline is the first in the world to serve the award-winning, plant-based Impossible Burger which is now available as part of its Business Premier menu on flights from Los Angeles to Auckland.Impossible Burger’s magic ingredient is an iron-containing molecule called heme which comes from the roots of soy plants. The heme in the Impossible Burger is the same as the heme found in animal meat. The result is a plant-based burger patty that cooks, smells and tastes like beef but contains no animal products whatsoever.Air New Zealand’s Inflight Customer Experience Manager Niki Chave says the airline has been watching Impossible Foods for some time and has been impressed with the work it’s doing.“Like Impossible Foods, we are committed to offering our customers a fresh and innovative approach to cuisine. We’re incredibly excited about this partnership and the opportunity to offer our Business Premier customers travelling from Los Angeles to Auckland a delicious plant-based option that tastes just like the real deal.“We’re confident vegetarians, flexitarians and dedicated meat lovers alike will enjoy the delicious taste of the Impossible Burger, but for those who want to stay with the tried and true it will sit alongside our regular selection of menu items prepared by our talented culinary team and consultant chefs.”Impossible Foods CEO and Founder Dr. Patrick O. Brown says the company’s mission is to make the global food system more sustainable by making products that don’t compromise on sustainability, nutrition or taste.“We launched with high-credibility, innovative chefs known for their delicious burgers, so it’s no coincidence our first airline partner has been named Airline of the Year for five straight years.“The Impossible Burger is available in nearly 2,500 restaurants throughout the United States and now Air New Zealand will help us take the Impossible Burger to even greater heights.”Air New Zealand will serve the Impossible Burger on flights NZ1 and NZ5 from Los Angeles to Auckland through until late October.Click here or on the image below to download broadcast quality footage on Air New Zealand and Impossible Foods’ collaboration.