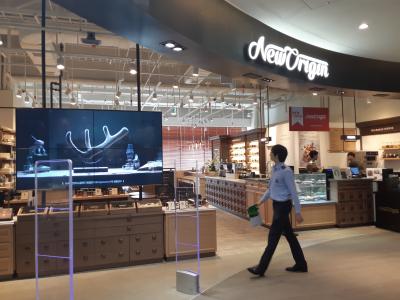 A New Origin café in Seoul, South Korea Branded health foods based on NZ velvet have transformed the Korean market. Creating a similar product category in China is a priority for the deer industry.

Apart from a brief downward dip in prices two years ago, driven by uncertainty about regulatory changes in China, NZ velvet production and prices have increased for eight years.

Deer Industry NZ (DINZ) Asia manager Rhys Griffiths cautions that this trend cannot continue forever. Also there are always unknowns that could upset the market, such as an escalation in the trade war between China and the United States. But based on all the known factors, he says deer farmers can expect another good year.

“Major velvet exporters and DINZ are working closely together, building demand with major health food companies in Korea. These companies prefer to deal direct with their NZ suppliers and put high value on price stability. It gives them the confidence to invest in product development,” Griffiths says.

Branded health foods based on NZ velvet have transformed the Korean market. Creating a similar product category in China is a priority for the industry

“In contrast, for the commodity traders who still buy two-thirds of NZ velvet, price instability can be a good thing. So despite good prices we are putting a lot of energy into building strong relationships with manufacturers and marketers in our major markets. We are taking control of our own destiny and making the commodity traders less relevant.”

He says 200 tonnes of the expected 725-tonne 2018-19 harvest will go to health food companies selling high value branded products in South Korea – a market segment that didn’t exist 10 years ago.

“Since then, following the lead of the Korean Ginseng Corporation, 30 companies have developed and marketed 73 velvet-based health food products, most of which are enjoying strong consumer demand. Of these, 55 are based on NZ velvet, with the New Zealand provenance strongly promoted,” he says.

New Zealand wants to repeat this success story in China, where – along with Australia – it is the only legitimate source of imported velvet. This valuable status is the result of a Regulated Control Scheme for Deer Velvet Harvest implemented by the Ministry for Primary Industries in August 2017, which set stricter on-farm hygiene, traceability and cool chain standards for velvet. Griffiths says DINZ has been working with Chinese regulatory agencies to provide a clear pathway for imports of NZ velvet to manufacturers in China.

“Health food marketers in China are very much aware of the success of velvet-based health foods in Korea. But they want to be sure that the velvet they are buying is legitimate and is available in sufficient quantities at stable prices before they invest the large sums needed to develop and market new products,” he says.

Griffiths says it took several years for DINZ and exporters to interest Korean health food manufacturers in developing velvet-based products. It will be the same for China, where DINZ is talking to some firms who are considering whether to take the plunge.

“Over the coming years we expect direct exports to Korean manufacturers to grow, aided by the annual reduction in the Korean tariff on dried NZ velvet. More of the velvet that goes to China will be consumed there and less of it will be re-exported to Korea,” he says.

“In Korea, affluent consumers will be offered NZ velvet-based products in uber-trendy cafes in sophisticated shopping malls. There is nothing in New Zealand that compares with Yuhan Pharmaceuticals New Origin stores, where you can buy an awesome smoothie and then take it through to their apothecary for a matching single-serve health ingredient to sprinkle across. It’s a wonderful fusion of old and new that will normalise NZ velvet as a very high end food ingredient.

“LG (which is known in New Zealand for its electrical appliances) has 22,000 door-to-door sales staff, many of whom are selling healthy food products. They and Lotte, a Korean multinational, are really amping their promotion of NZ velvet products.”

More in this category: « New Zealand hosts RCEP round MÄori food and wine exporters get onto the blockchain »
back to top
Jun 20, 2018