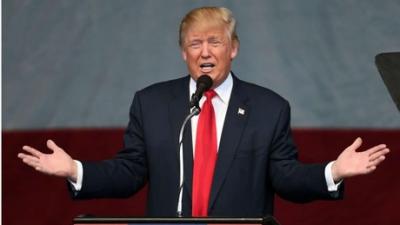 President-elect Donald Trump's threat to slap punitive tariffs on Chinese goods is a worry for firms that trade with the country in the US Midwest, a decisive region in the Republican's election triumph.

But some companies in the region that benefit from global trade are worried about early signs the president-elect plans to take a hardline stance with China.

"We export a lot of products to China," said David Shogren, president of US International Foods. "My fear is whatever changes Trump makes ... that China will retaliate in some ways."

The St. Louis company depends on China as a key export market for peanut butter, mustard, nuts, cereals and other items. About 50 percent of its revenues are tied to China, compared with just five percent to its home market.

"Our customers may switch from US products to other countries: Europe, Australia, New Zealand or Japan, or other exporting countries," Shogren said.

Shogren said his company is trying to build markets in Southeast Asia, including Vietnam, Malaysia and Singapore.

Trump during the campaign threatened to impose 45 percent tariffs on China, saying the world's second biggest economy has stiffed the US with currency manipulation and illegal subsidies.

"China will take a tit-for-tat approach," said an editorial in Global Times, a Chinese newspaper that is close to the government.

"A batch of Boeing orders will be replaced by Airbus. US auto and iPhone sales in China will suffer a setback, and US soybean and maize imports will be halted," it warned. "China can also limit the number of Chinese students studying in the US."

China also responded sharply to Trump's decision to accept a phone call from Taiwan President Tsai Ing-wen and to suggestions he is rethinking the decades-old US "One China policy."

The One China policy is the "political bedrock" of relations with the US, Chinese foreign ministry spokesman Geng Shuang said.

If it is "compromised or disrupted" cooperation in major fields would be "out of the question," Geng added.

- Writing to Trump -Ohio-based Progressive Molding Technologies imports tooling from China that enables it to compete with Chinese rivals.

"My fear is we will lose access to China's cheap tools," said president Laird Daubenspeck. "At that point, I will anticipate the our customers will start to slow down new product launches and we will see less growth."

Daubenspeck has written twice to Trump, once after he was elected and a second time after the Taiwan phone call.

"My biggest fear is he doesn't understand the impact his words have."

Among big manufacturers, Boeing is especially vulnerable. About one out of three Boeing 737 planes delivered in 2015 was destined for China. The company just announced Monday that it will reduce production of its 777 starting in August, which will have an impact on employment.

General Motors also could see its business disrupted in a trade war. China is GM's biggest market for cars, with 2.38 million vehicles sold in the first eight months of 2016, compared with 1.96 million in the US. GM also manufactures the Buick Envision in China, which is exported to the US and could suffer under US tariffs.

A GM spokesman said it was too early to comment on any potential shifts in trade policy, but noted that GM chief executive Mary Barra agreed to participate in Trump's strategic and policy forum, along with other top chief executives.

The century-old National Foreign Trade Council on Monday said it will work with the new administration but will fight protectionism.

"And we're prepared to argue against the use of trade restrictions as a way of achieving greater economic growth -- history has shown that really isn't an effective way of doing that," Rufus Yerxa, head of the 300-company NFTC, whose members export about $3 trillion a year.

More in this category: « The End of the Politically Correct Hong Kong should seize the day if Trump opts out of TPP: China Daily (Asia) Columnist »
back to top
Aug 30, 2018

US proposes tariffs on 1,300 Chinese goods