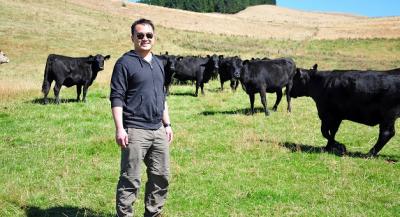 New Zealand’s sheep and beef farmers have a profound story to tell about where and how our meat is produced, says Mike Lee.

New Zealand’s sheep and beef farmers are sitting on a grass-fed gold mine.

This is according to Mike Lee, the CEO and founder of New York-based food design and innovation agency Studio Industries, who says this country’s farmers have a great story to tell consumers hungry to know where and how their meat is produced.

Visiting this country, Lee says it is about creating the profound out of the mundane – and for NZ sheep and beef farmers – their mundane is profound.

“New Zealand farmers are grass farmers and it’s about building that image of turning grass into the protein on your plate.

Stories, he says, are what connects people and any story about food is actually a human story – the story about the growers and farmers and where and how they produce food.

“Your story connects the food system with the human experience.”

While historically, stories were exchanged around the campfire, today’s digital “campfire” allows global connections and as Lee says, there are now so many ways consumers can hear and learn about food and the people who produce it.

He urges this country’s red meat industry to identify people who can tell stories on its behalf.

“Empower people as ambassadors to tell your amazing story for you – it’s just a matter of finding the right people.”

Lee says food today is no longer just about sustenance, it is intrinsically linked with social bonds and values. The food consumers eat says something about how they want the world to be, so in essence people are eating their values – and these include the way animals are farmed – although food also needs to deliver on taste.

To consumers, the process is the product and in the case of meat, this is about how animals are grown.

In New York, grass-fed meat fetches a premium and is a selling point on restaurant menus and in bone-broth cafes.

Thanks in part to the vilification of sugar, meat is now trendy, and butchers the new rock stars. In the US, there has been a resurgence of craft butcheries such as the “The Meat Hook” in New York city, where customers can watch carcases being boned out and gather information about how to make use of every part of the animal - not just the primal cuts. Even the meat sections in supermarkets are being transformed into old-fashioned butcher shops, where the carcases are cut in full view of the public, rather than being hidden away.

Lee says the “eat local” movement is acknowledging that local is not always better and how a product is produced can offset disadvantages of distance – which again favours NZ red meat producers.