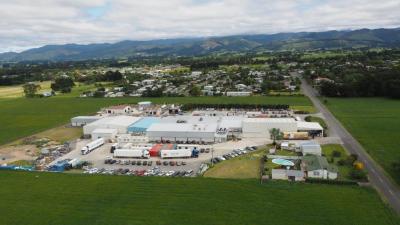 An aerial view of the factory on Moreton Rd

Nov 7, 2017  -   A Carterton business which produces a third of the country’s bacon could bring more jobs to the region after it undergoes a development worth more than $10 million. The expansion of the Premier Beehive factory is scheduled to be completed in November next year.  Managing director Dene McKay has worked with Premier Beehive for nine years but has not seen anything like the upgrade that is planned for the factory on Moreton Rd.

“We’ve outgrown the space that we have in regards to the footprint and capability.”

The planned development was a “big investment” and would take just over a year, he said.

“We have no plans to go anywhere else, we are committed to our staff in the area.”

It naturally follows on from the “rapid growth” the company had seen over the past six or so years.

In that period business had doubled and it was “timely” to now expand the facilities.

The company has a turnover of more than $100 million and was forecasted to sell more than 13,000 tonnes of product this year.

“Our streaky bacon is the number one selling bacon in the country,” Mr McKay said.

Over a year ago, the company invested in some sausage manufacturing equipment and the planned expansion would assist in growing that category, he said.

During the lead up to Christmas there would be more than 300 employees in the factory.

Mr McKay said he was proud of the company’s progress and that it echoed the efforts of the staff.

“The effort that’s gone into the production of these products is reflected in our position in the marketplace.”

Carterton Mayor John Booth has been one of the main port of calls during the resource consent process.

“Some of the machinery is outside and there has been a bit of noise attached to it,” he said.

“They have made a really conscious effort in their building programme to house a lot of that machinery inside.

“It just shows you it’s a responsible business.”

It was good to have a business like that expanding because it showed confidence in the district, Mr Booth said.

“They are buying into what Carterton is and the progressive way we approach things.”

It would add to the positive feeling in the district at the moment, he said.

The business started life as a family-owned pig processing company in 1991.

The Reid family sold their business on in a move that would create the Premier Beehive brand.

It has changed hands twice since, and is now owned by global brand JBS Australia.

More in this category: « Nestlé to source only cage-free eggs by 2025 Hilary Wroe Hawkes Bay Chef's EIT training took her to NYC »
back to top
Aug 16, 2018