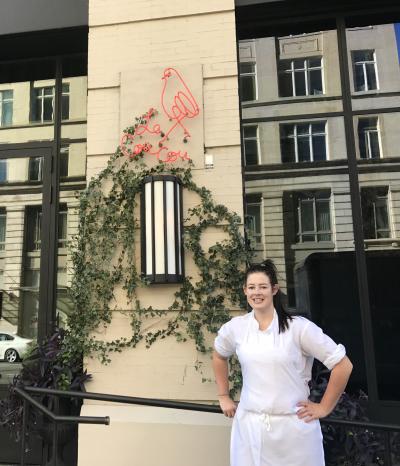 7 Nov  -  Back from New York, patisserie chef Hilary Wroe recently shared her experience of working at top-end Manhattan restaurants with trainee chefs at EIT.  Hilary, who grew up in Waipukurau, was happily embracing Hawke’s Bay’s more relaxed vibe after her hectic year in the Big Apple.

For six months she worked at The Musket Room, a restaurant owned by New Zealander Matt Lambert. Her second six-month stint was at Le Coucou, a French fine dining establishment catering for around 200 guests a night.After just a fortnight back in the country, Hilary was weighing up offers for jobs in New Zealand and overseas. That, she said, was a measure of the demand for well-qualified patisserie chefs. It also reflected the experience she had gained in working for leading restaurants in the USA.

“There will always be a job for me at Le Coucou working for Daniel Skurnick. I’ve also been offered positions in two restaurants in Paris.”  After leaving Central Hawke’s Bay College, Hilary completed EIT’s Diploma in Professional Culinary Practice in 2013. That year, she was among the top achievers recognised at the Greenmeadows Rotary and EIT Hawke’s Bay Apprentice Awards.

Patisserie was part of her EIT programme, but because the institution didn’t offer a qualification then that specifically focused on developing those skills, she undertook further studies in Auckland.Now, up-and-coming chefs wanting to specialise in patisserie can study EIT’s advanced diploma programme.

Hilary is enthusiastic about her time at EIT and keeps in touch with her former tutors through Facebook.  “If it weren’t for EIT I wouldn’t be where I am today. EIT is great, it’s a good foundation for getting a job.“I’ve enjoyed progressing to patisserie because it calls for a wide range of skills. There are so many facets. You can do bread-making, desserts, candy, chocolates and plated desserts in restaurants.” With the expiry of her one-year visa to the States, Hilary is now considering her next move.

“Ideally, I would probably want to work in a particular Auckland restaurant,” she said. “Otherwise I might go to England and do a stint. There are lots of options. But right now I’m taking a well-deserved break – until I get bored and want a job.”

More in this category: « Carterton bacon business gets $10m boost ApiTrak - Tracking honey through the supply chain »
back to top
Jun 12, 2018