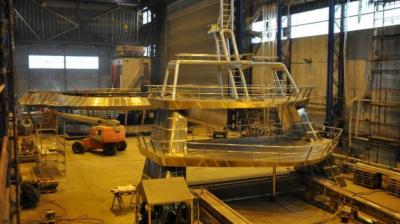 Construction is underway on Sealord's new $70 million factory vessel, which is being built in Norway with additional steel work carried out in Poland.

Sealord is now a year out from taking delivery of its state of the art new factory vessel.

Work began on the $70 million project in January and, according to Sealord fleet harvest manager Scott Gillanders, is already running ahead of schedule.

The ship's hull was being built in eight blocks, with seven of these constructed in Poland before being barged to the Simek shipbuilders yard in Flekkefjord, Norway.A concept drawing of Sealord's new $70 million trawler.

The first four blocks will arrive in July, with the remaining four blocks expected in September before being fitted to the ship's superstructure.

Testing will start on engine and factory components in February 2018.

Two project managers – based in New Zealand and Europe respectively – would observe the build in the months ahead.

A Sealord contingent will be in Norway for sea trials in March to determine whether the company was ready to take delivery on March 23.

More in this category: « Formica plan major investment in North Shields factory in the UK NZManufacturer July17 Edition »
back to top
Jul 09, 2018