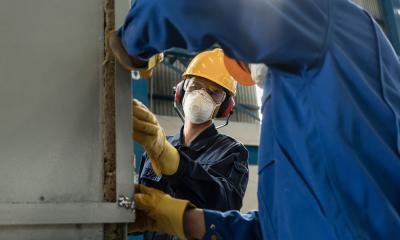 An Irish insulation manufacturer , Kingspan who also have presence in the New Zealand market,  has officially opened its new facility in Somerton, creating 50 new jobs, and setting new standards in energy efficiency.

The Victorian Government has worked with Kingspan to develop the Oherns Road factory – worth about $40 million – by providing funding support and assisting with planning and approval.

It includes a 750 kW solar system built into the roof design, and innovative features such as industrial low energy lighting and heating systems.

It’s at least 10 per cent more energy efficient than Kingspan’s other manufacturing facilities.

Kingspan will supply its insulation products to the Australia, New Zealand, Asia, and Oceania markets, with 35 per cent of output expected to be exported by 2020.

The Victorian Government supported Kingspan’s investment in partnership with the Federal Government through the Melbourne’s North Innovation and Investment Fund (MNIIF).

MNIIF has since been replaced by the $33 million Local Industry Fund for Transition (LIFT), supporting new investment, and creating jobs for retrenched automotive workers.

These grants have already created an additional 122 jobs from six projects in Melbourne’s north – as the Victorian Government works to build a strong, innovative and sustainable manufacturing sector.

More in this category: « Cost-Effective Adhesive Bonding for High Strength Assemblies Australasian’s aviation manufacturing sector set for boom times »
back to top
May 31, 2018