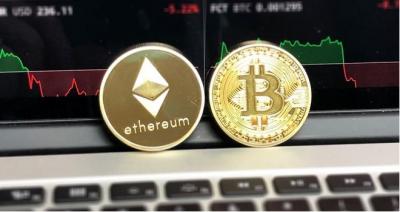 Jan 3, 2018 - Ether, the coin or token associated with the ethereum platform started 2018 right reaching an all-time high of over $900 this morning January 2. Ethereum is the third largest cryptocurrency by capitalization after being overtaken by Ripple for second place late last year.  Ether's market capitalization is almost $85 billion. 79 million coins are in circulation.

Ether's record riseEther started to rise around midnight Coordinated Universal Time (UTC) and had reached a high of $914.83 at 02:30 UTC. Within the last 24 hours the price of ether has risen 14.52 percent . Another article speaks of the price of bitcoin rising by as much as 19 percent in the last 24 hours but no doubt is referring to a different time period.

Price increases are being accompanied by larger trading volumes. This is particularly true on Asian exchanges in Singapore, Japan, Hong Kong and South Korea.

The cryptocurrency market is generally positive today with their market cap reaching a new high of $645 billion.

Ether and many other cryptocurrencies did well in 2017Ether performed well in 2017. Over the year its price showed an amazing increase of 9,100 percent. Even at that it was just the sixth best performing cryptocurrency last year. Bitcoin which received most publicity for its increases was just 14th rising 1,318 percent during the year.

Bitcoin's share of market is decreasingWhile bitcoin still leads the market, its very success has stirred interest in other coins. This has led to more investment in ethereum, ripple, litecoin, bitcoin cash and many other cryptocurrencies.Bitcoin's share of the market is now at a historic low of just 36 percent.

Although bitcoin is not leading the charge upward in the New Year, it seems to be in recovery mode. It rose to $14,043, an increase of close to 5 percent in 24 hours. Its market cap is now $235.6 billion. It is still a long way from a high close to $20,000 in December but many thought it was long overdue for a significant correction in its price before any further rise.

According to this article, Ripple rose 11.48 percent to a new record while Ethereum rose 16.97 percent also a new high. Stellar an eighth place coin rose a humongous 36.03 percent to $665 a record high.

While for the most part there is no special news that has led to the rise in many cryptocurrencies, Ethereum may be benefiting from the launch of a test network for Casper, an Ethereum upgrade as indicated on the appended video.

Many bitcoin competitors have been actively developing projects. Investors may be looking at platforms that are developing useful projects or projects that have potential utility as in Ripple's bank payment system. However, it may not be wise to bet against bitcoin. It could just be in a consolidation process before it takes off upwards again.

More in this category: « Mastercard Moves Toward Fast Blockchain Payments “What is HODL!?” The Top 5 Must-Know Cryptocurrency Jargons »
back to top
May 03, 2018