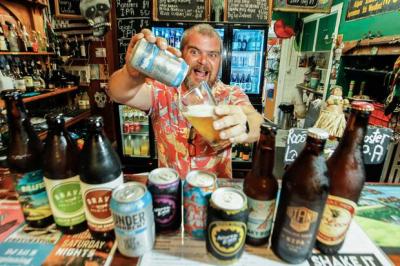 Once upon a time, a few decades back, there was a brewery in Hawke's Bay writes Roger Moroney for Hawke's Bay Today.  A brewery — just the one — and it was called Leopard and sat on the edge of central Hastings.

It was closed, however, in the early '90s but it did not spell the end of the art of brewing in Hawke's Bay. This was the time of the initial spark which slowly grew into what has become known as microbreweries, or craft breweries.

Many within the industry refer to that time as the "craft beer revolution" and, in terms of what the smaller but passionately devoted breweries began turning out, it was indeed a revolution.

One which left smiles on the faces of folk who were taken to new and unique taste levels.

People began getting familiar with things called IPA and pilsners and brown porters and English reds and pale ales.

Among the first on the scene was Roosters Brew House in Hastings, which began brewing and pouring in 1994 and is still fizzing.

A year later the Hawke's Bay Independent Brewery (Hawke's Bay Brewing Company) based in Napier (which kicked off with the Mates line) hopped aboard and the now closed Limburg Brewery also emerged before the decade was over.

Craft beers had begun appearing from one end of the land to the other, and while Hawke's Bay may have initially been behind the growing "revolution" it has very certainly now caught up.

According to the New Zealand Craft Beer Industry, total of sales of craft beers were up by 35 per cent over the past year, and it is estimated craft beers now account for around 15 per cent of domestic sales and consumption.

Published in PRODUCTS
Tagged under

More in this category: « Fujifilm announces new mirrorless camera and macro lens for New Zealand market
back to top
Jun 12, 2018

Hastings District Councillors must all be skipping breakfast