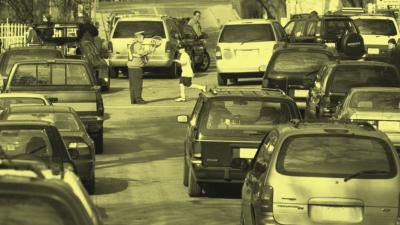 As research links cars with pollution and traffic injuries, kids and educators call for walking, biking, and busing to school in the U.K reports Eillie Anzilotti for Fast Company.

I vividly remember the morning scene at my elementary school in Oakland, California. Every day, a parade of cars would snake in a circle around our concrete playground, dispensing kids in designated zones marked with lurid traffic cones. The line of cars waiting to get inside the school stretched up the block. Stress levels generally ran high. Once, my father, facing pressure from an irate parent behind him, accelerated the car over my foot as I struggled to pull my backpack out the door.

Not only is the school drop-off a breeding ground for injuries and crashes as stressed-out parents try to maneuver cars around scrambling kids, research is proving that it also wrecks the ambient air quality around schools, potentially setting up children for health issues later in life. So now, a growing number of schools across the U.K.–and a handful of other countries–are moving to ban school drop-offs by car.

Nine schools in Edinburgh have prohibited car drop-offs, and the London neighborhood of Hackney, which has been dabbling in child-centered design initiatives, has shut down the roads outside of five schools, and more neighborhoods are expected to follow suit. Several other U.K. cites have taken similar measures, as has Vienna, where a new “school street” initiative bans cars from the roads leading up to a school between 7:45 and 8:15 a.m., making more space for cleaner and safer modes of transit like walking and biking. Bolzano, Italy, pioneered a similar initiative decades ago, and now 80% of kids there walk, bike, or bus to school. . . .