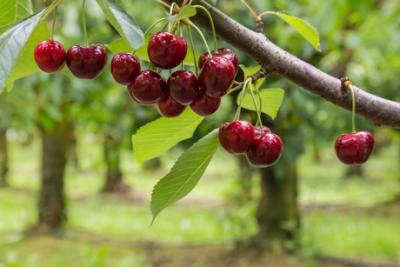 Following the heavy rain in the region last week, some Teviot Valley orchardists are reporting damage to about half of their early ripening cherry crop.

Some market gardeners will have to freeze their early strawberries, rather than sell them fresh, because of rain damage.

Frog Rock Orchard owners Luke and Shona Denton had intended to pick some of their early ripening Burlat cherries to sell at the Otago Farmers Market last week, but the rain stopped that.

They had several other later ripening varieties, which had not been damaged.

''We are growing enough, so no matter what happens we are going to have something,'' he said.

John and Joan Rowley, of Mt Teviot Station, grow peonies for export under the JOANZ banner, which is Mrs Rowley's business name.

They employ eight staff during the harvesting season.

Mr Rowley said their peonies, which were picked with closed blooms, were unaffected by the heavy rain.

''We had all our staff working right through the rain picking, and they did well,'' Mr Rowley said.

He said once the stems were picked, they had to be shaken to remove the water, then put in buckets in a draughty place for about half a day, before going into a chiller to remove the moisture, prior to export.

''We did have some challenges because of the amount of rain and we had a lot of water around.

''When dealing with nature, when growing plants, you have got to put up with it.''

Berrylands' strawberry blocks were submerged for about two days and much of the fruit, which was ready for harvest, was damaged.

''The plants had loads of fruit on them,'' she said.

''The strawberries were absolutely beautiful but are now pitted.''

While some fruit was undamaged most would be chopped and frozen.

The strawberry plants would recover and late-ripening fruit did not appear to be damaged and would be harvested as normal.

Ms Patrick said about half or more of their early ripening cherries, of the Earlise and Burlat varieties, had split.

''We were going to pick last weekend, but the later crops should be OK.''

She had heard neighbouring orchards had similar problems.

Ettrick Gardens' market garden co-owner John Preedy said he had some losses with his strawberries from last week's rain.

They had already had their first pick of the season and were preparing for the second round.

The rain had also held up their planting-out programme for brassicas, fennel and celeriac.

''Our blocks are still very wet but they will dry.

''It is just another season, and there is always something different every year to challenge us,' Mr Preedy said.

More in this category: « Postharvest scientist honoured by NZIAHS Kiwifruit growers can now access a new tool to help them combat the bacterial disease Psa – the biocontrol product AureoGold™. »
back to top
Oct 13, 2018