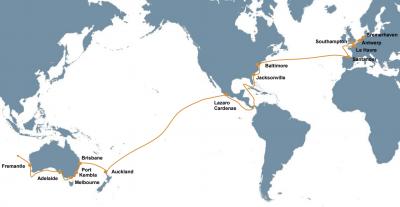 He declined to identify the customer.

Currently Hoegh requires going through ports in Europe, where vehicles are transferred to another vessel, however the new monthly service will have faster transit times and require less handling, which minimises the potential for damage.

“Time to market is important for the customer,” Warren said.

Hoegh’s service puts it in direct competition with Wallenius Wilhelmsen Logistics, who also offers direct ocean service to the Australia and New Zealand region from the U.S.

The Hoegh vessels will originate in Europe and discharge vehicles in Baltimore before being loaded with exports from the unnamed customer.

Vessels also will stop in Jacksonville, Fla., another major auto port, before heading through the Panama Canal to the Mexican port of Lazaro Cardenas, where vehicles produced by the Detroit 3 car company also will be loaded.

The rotation will continue through the ports of Auckland, Brisbane, Port Kembla, Melbourne and Fremantle.

More in this category: « Safety charity tackles driver distraction Blockchain in Transport standards to remain open »
back to top
Apr 05, 2018