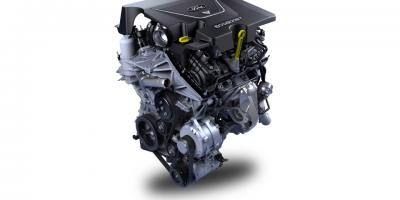 Feb 02, 2018  -  Ford may be looking at removing as much metal as possible from its cylinder heads, if new patent applications by the company published early February are any indication.

The company’s new Hybrid Composite Cylinder Head would be made up mostly of a polymer composite instead of the traditional aluminum or iron, for better efficiency, lightweighting, and to reduce corrosion, explains The Truth About Cars.

The patent outlines how the composite, which may be fiber-reinforced, will surround an internal cast-iron skeleton. Previous lightweighting cylinder head patents specified the use of a ceramic composite, but that material’s shortcomings included the fact it couldn’t be formed around a metal inner structure, and that it couldn’t withstand high heat and pressure very well.

Ford’s composite heads would instead be made from a resin, silicone, or some combination thereof, which would also reduce the production cost of the components. Slightly improved fuel economy might also be a byproduct, since the part would weigh less.

More in this category: « And suddenly the inventor appeared Airborne, Siemens and SABIC partner to mass produce thermoplastic composites »
back to top
May 31, 2018