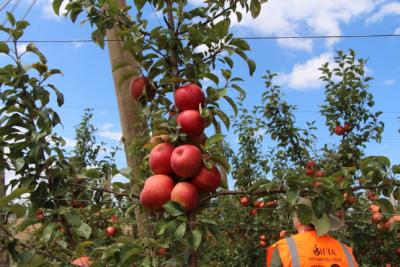 Feb 21, 2018 - It was all things ‘Honeycrisp’ when the International Fruit Tree Association’s (IFTA) 2018 New Zealand Study Tour kicked off in Christchurch, NZ. While most growers on this tour are familiar with the pesky but popular variety, the story of how ‘Honeycrisp’ found its way to the South Island is unique.

As Andy McGrath of M A Orchards told attendees, they were seeing the genesis of a new fruit growing region in Timaru (on the coast, south of Christchurch), and “’Honeycrisp’ is going to be a variety that drives this into a major district,” he says.

When ‘Honeycrisp’ was imported in 1996 to New Zealand, it was among a few varieties tested, but it was discarded, McGrath noted. He says the opportunity arose to bring together a program to license ‘Honeycrisp’ in New Zealand.

Yes, ‘Honeycrisp’ is a managed variety in New Zealand. McGrath says that was a deliberate decision to manage ‘Honeycrisp’ as intellectual property, ensuring high quality from beginning to end of the process. As McGrath began planning ‘Honeycrisp’s’ future in the country, he said the first order of business was to discover where in the North and South Islands the variety flourished. Using knowledge of how the variety grew well in the U.S., McGrath said the hope was that ‘Honeycrisp’ would work well in the existing fruit-growing region of Otago.

However, after testing several sites, it turned out that Timaru at 43.2° latitude “was absolutely the best,” McGrath says. Unfortunately, there was no fruit production infrastructure – it was not a region with a packinghouse or any orchards.While the ideal site was discovered, ‘Honeycrisp’s’ popularity in the U.S. took off; and by 2011, McGrath met with Bruce Allen of Columbia Reach Orchards who was interested in growing ‘Honeycrisp’ in New Zealand to have year-round production and availability of the variety.

The Nitty Gritty of ProductionFor now, M A Orchards packs about 550,000 cartons of ‘Honeycrisp,’ and McGrath says he expects the orchards to be corporatized in the next five to 10 years.

“As a variety, it’s challenging,” McGrath says. “It has its moments.”

Tesco scraps best before labels on fruit and veg packaging