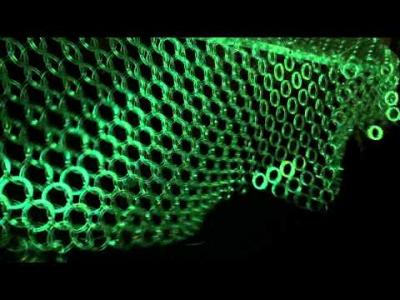 In 2007 Horsham patented an award-winning technology that creates interlocked seamless mesh rings without any joins or gaps. Horsham began experimenting with the mesh while working as an Artistic Director of Creatures, Armor and Weapons at Weta Workshop. He worked closely with director Peter Jackson for four years, fabricating the costumes of the Academy Award-winning The Lord of the Rings trilogy.

“We’re honoured to be in the heart of New York bringing the freedom and joy embodied in our design to over a million New Yorkers and visitors from throughout America and the world in Times Square,” says Kayne. “New York and New Zealand are global centres of innovation and leaders in design. The NYCxDesign Award for Best Architectural Product perfectly supports our U.S. market entry.”

#WaveNewYork has been designed by Kayne Horsham and American artist and MacArthur fellow Ned Kahn, who are also currently working on a dramatic art installation in a high profile location, to be unveiled this summer in New York.

“#WaveNewYork by Kaynemaile is a highly visible and vibrant focus of the Times Square Design Pavilion,” says Ilene Shaw, director and curator of NYCxDesign. “The material is beautiful, the installation design is playful and interactive, and the concept has pure innovation at its core. It’s an honor to have Kaynemaile at Design Pavilion 2017.”

About KaynemaileKaynemaile was founded in New Zealand by CEO and inventor of the mesh and liquid state manufacturing processes, Kayne Horsham. The Kaynemaile seamless mesh is based on a traditional European chainmail assembly but produced via the world’s first liquid state assembling process, able to form a 3D impact-absorbing structure made up of solid rings with no joins or seams, is 100% recyclable (cradle to cradle) and has an extraordinary strength-to-weight ratio. Its patented manufacturing process is an award winning technology used to create, divide and protect building interiors and exteriors around the world. www.kaynemaile.com Instagram @kaynemaile hashtag #wavenewyork

NYCxDESIGN, New York City’s official citywide celebration of design will run from May 3-24, 2017. Spanning all disciplines of design, NYCxDesign creates a collaborative platform for cultural and commercial opportunities, elevates established and emerging design practices and increases awareness of and appreciation for design by all audiences. Hosted in New York City, NYCxDesign brings together all the disciplines of design, commerce, culture, education, and entertainment with a full, varied program, including exhibitions, installations, trade shows, talks, launches and open studios. 2016, the fourth year of the celebration, featured over 500 events across the five Boroughs of New York City and included topics from graphic design to architecture, technology and urban design to fashion and product design, interiors to landscape, furniture to design thinking, and more. The program is overseen by NYCEDC together with a Steering Committee comprised of leaders and leading institutions across most design disciplines. www.nycxdesign.com

Published in News Through Today
Tagged under

More in this category: « Headlines For Thursday 18 May 2017 NZ signs deal with US to help make multinationals pay more tax »
back to top