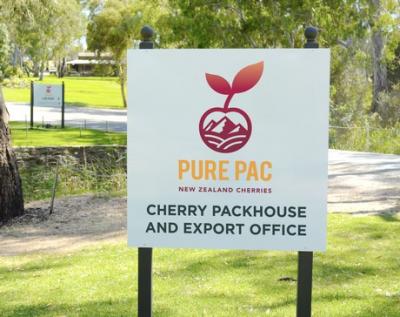 A group of leading New Zealand cherry growers have joined together to export a premium cherry line to the international markets starting in the 2017/18 season.

"Pure Pac consists of a group of 7 passionate Cherry Growers who all own orchards in the Cromwell Area Central Otago," explains Ross Kirk, Chief Executive of Hortinvest which has been contracted as Pure Pac's project manager and packhouse manager. "What makes Pure Pac unique is all the shareholders are grower suppliers. We will grow, pack and market the fruit directly to buyers in the international market. Pure Pac have engaged an experienced team to put together their packhouse, logistics and marketing of our cherries."

2017-18 will be the first export season for Pure Pac, however the growers have been exporting via other packers/exporters. According to Kirk they got together and decided they would like to work directly with the international market and therefore decided to invest in a state of the art packing house which will be ready for the first cherries to be processed in December 2017.

The harvest starts prior to Christmas and will run till early February.

"We have several varieties. The key export ones are Samba, Lapin, Sweetheart, Staccato and Rainier. In the first season we expect to pack 450mt and over the next 4 years anticipate volumes increasing to 1000mt per annum," said Kirk. "We are growing the varieties that suit the Asian market, they are sweet, juicy and crunchie."

Pure Pac are working with Compac Engineering to put in the latest cherry grading technology, along with some technology which is imported from Italy and France to complete the packhouse set up. The new packhouse will be capable of handling 1200mt’s over the cherry season.

"We are very excited to be launching our two brands at Asia Fruit Logistica: Pure Gold and Gold Reserve," stated Kirk. "The difference in the brands is simply the box and brand design. The quality of the cherries will be the same high quality premium cherries in each box.

"We have very strong demand from Taiwan, China, Vietnam, Thailand, we are looking to expand throughout Asia, and we would like to also work with customers from India, Indonesia, South Korea and Japan."

Pure Pac will be at Asia Fruit Logisitca as part of the New Zealand Country stand. The team, including some of the grower/directors will be there to meet with customers and discuss the group's cherries and the up coming Cherry season.

More in this category: « NZ Named World’s Most Competitive Apple Performer for Third Consecutive Year "New Zealand still on track for a bumper apple season" »
back to top