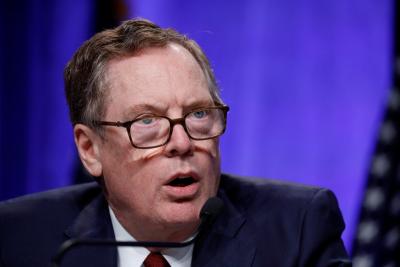 MEXICO CITY (Reuters) - Trade negotiators from Canada and the United States gathered under rainy skies in Mexico City on Friday to discuss the North American Free Trade Agreement, with the mood darkened by U.S. President Donald Trump's persistent threats to pull out.

Teams from the three countries were due to kick off a second round of talks on 25 areas of discussion, with subjects such as digital commerce and small businesses seen as areas where consensus was possible, Mexican officials said.

The Sept. 1-5 round will also touch on more thorny topics such as rules governing local content in products made in North America, Mexico's economy ministry said in a statement. Mexican officials believe Trump wants to include rules that some content must be made in the United States.

Trump's attacks on NAFTA are seen by Mexican and Canadian officials as a negotiating ploy to wring concessions, but they have heightened uncertainty over the accord. Away from the diplomatic noise, the Mexico round of talks is expected to help define the priorities of each nation rather than yield major advances.

Trump and Canadian Prime Minister Justin Trudeau spoke by telephone on Thursday and stressed they wanted to reach an agreement on NAFTA by the end of the year, the White House said. If they achieve that, it could set a record among the fastest multinational trade negotiation.

The goal is to get a deal before Mexico's 2018 presidential campaign starts in earnest. Officials fear the campaign will politicize talks, with nationalist frontrunner Andres Manuel Lopez Obrador already recommending a tougher line from Mexico.

Nevertheless, one Mexican official noted that Trump's threats had put pressure on his negotiators, forcing them to adopt tougher positions "than they would like," while another official said they were ready to leave the table if needed.

Negotiators predict that there would not be substantial discussion of areas of friction in either this round or the next one, a source familiar with the process said.

"We do not expect any major breakthroughs or major developments in this round. We really don't," the source said.

Trump said this week he might trigger a 180-day countdown to withdraw from NAFTA while the talks were ongoing to help meet his goals, which include sharply reducing a $64 billion annual U.S. trade deficit with Mexico.

NAFTA, first implemented in 1994, eliminates most tariffs on trade between the United States, Canada and Mexico.

If NAFTA collapses, costs could rise for hundreds of billions of dollars of trade as tariffs are brought back. Free-trade lobby groups say consumers would be saddled with higher prices and less availability of products ranging from avocados and berries to heavy trucks.

Mexico's Economy Minister Ildefonso Guajardo and Foreign Minister Luis Videgaray told officials in Washington on Wednesday that Mexico would walk away from the negotiations if Trump pulls the trigger on withdrawing from the deal.

Amid Trump's warnings, Mexico is preparing for something hard to imagine even a few months ago - life without the agreement that boosted trilateral trade to around $1 trillion annually.

Juan Pablo Castanon, president of Mexico's Business Coordination Council representing the private sector in the talks, said Mexico's "Plan B" could be up and running within three months of an eventual NAFTA collapse.

Talking on Mexican television, he said the plan was focused on striking new trade arrangements in Asia and Latin America, sourcing alternate suppliers such as Brazil for grains now imported from the United States, and finding ways to recreate investor guarantees that are included in NAFTA.

Mexico's President Enrique Pena Nieto travels to China this weekend for talks about trade and investment, while Mexican negotiators were due to take part in trade talks with South American nations, Australia and New Zealand on Tuesday.

Mexico's status as the biggest foreign buyer of yellow corn from the United States gives it some leverage in the NAFTA talks, with corn-growing states that voted for Trump in 2016 emerging as a powerful voice that is opposed to scrapping the deal.