Engineering Destruction: The Terrifying and Awesome Power of The USS Gerald R. Ford 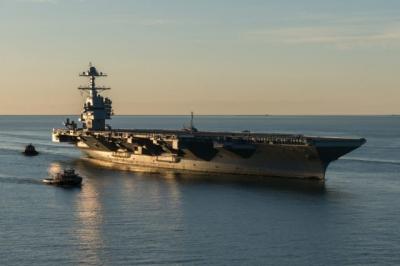 The USS Ford at its commissioning ceremony. This ship is massive! At a length of 1,106 feet, the USS Ford is the largest aircraft carrier in the world and will carry 2600 crew members when it officially deploys in 2020. (Image courtesy of the US Navy.)

When a warship is commissioned, it is legitimized under law, and placed in active service for the first time. Replacing what was known as the Nimitz class of aircraft carriers, the USS Ford will spend its first four years under scrutiny as builder’s sea trials get underway.

The trials test crucial systems and technologies aboard the ship, and will cost USD $780 million on top of its USD $12.9 billion manufacturing price tag. There were delays and overruns because of the complicated task of integrating whole new systems and an entirely new class of technology aboard the ship, which was originally supposed to be completed in 2015 for USD $10.5 billion.

Designing a new class of aircraft carrier means that expectations for improved performance are going to be set extremely high, and you’ll see that the features of the USS Ford make it a true marvel of modern weapons engineering.

Interestingly, the USS Ford also appears to be a minor milestone moment for 3D modeling technology, because this is the first ship to be fully designed as a 3D model. The USS Ford has its own nuclear plant inside of it, which generates a consistent and high enough rate of energy that affords the vessel a top speed of 30 knots (34.5 mph, 55.5 km/h).

Nuclear warships like the USS Ford are designed to be fully autonomous. The amount of nuclear energy produced by the USS Ford means that it could run without stopping to refuel for 20-25 years.

There are two A1B reactor plants (“A” is for Aircraft Carrier, “1” is first-generation, and “B” is for Bechtel, the manufacturer) aboard the USS Ford, and they were specially developed by Bechtel for the new class of supercarrier. Bechtel normally handles engineering and construction for nuclear plants in the USA.

The A1B generates almost 3 times as much power as the A4W reactor plants on the active Nimitz-class carriers. The exact number is classified, but estimates have been made that the total increase in energy is 700 MW.

The US Navy began experimenting with the design and production of a launch system that uses linear induction motors and electromagnets instead of steam-powered turbines because engineers realized that you could improve three things: eliminate the need for housing a separate steam boiler, increase the level of control during jet or drone takeoffs, and reduce the amount of maintenance in two ways—using solid state components and reducing wear and tear on the supercarrier from repeated launches.

More in this category: « To compete on a global stage, Christchurch manufacturing company Wyma Solutions needs more apprentices fast. How A Michigan Injection Molder Overhauled Its Floor for the Future »
back to top
Jun 18, 2018