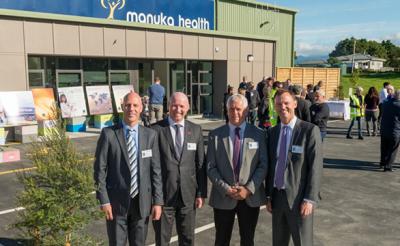 Manuka Health has officially opened its expanded national apiculture business after a $3.5million build that will significantly expand the organisation’s export capacity.

At the event Minister Bennett planted the last of 2,000 native plants that complete the build; a symbolic Manuka tree representing the future of the industry.

Manuka Health CEO John Kippenberger says investment in the Centre’s expansion is an important milestone in the company’s growth, ongoing product quality and traceability assurance, and its commitment to the Wairarapa community.

“Manuka Health is proud to invest in the region and play our part in the local and national beekeeping sector. The Wairarapa Apiculture Centre employs 27 people during peak season with the Centre’s expected growth in processing capacity seeing up to 15 more employees join over the next two years.

“The Centre plays a crucial role in providing a secure and efficient passage for our products. It’s a hub for the extraction and collection of honey from more than 20,000 hives that will come in for processing from Northland, Waikato, Taranaki and Wairarapa during the next season. The Centre ensures our consumers in cities such as Frankfurt, Beijing, San Francisco and London can have absolute confidence that the product they are buying has been treated with care and under strictly controlled conditions right from the hive.

“The capital investment in the Centre’s build facilitates a substantial expansion in honey extraction capability. This is another step in our journey to help New Zealand meet its $1.2bn target of honey sales by 2028,” says Mr Kippenberger.

The Wairarapa Apiculture Centre collects and extracts honey from honey frames. Honey boxes from around the North Island are sent to the Centre for honey extraction and drum storage during the November to March harvest each year. The drums are then freighted to Manuka Health in Te Awamutu for testing and packaging.

More in this category: « Advantage of NZ's GE-Free Positioning Switching to organic farming is paying off for a Waikato farmer. »
back to top
Mar 16, 2018

in THE REPORTERS DESK