Switching to organic farming is paying off for a Waikato farmer. 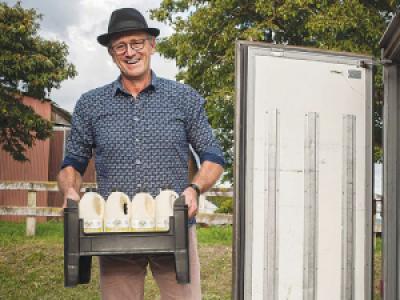 Vosper told Dairy News the win affirms “we are on the right track; we are pleased to win award”.

He sees a growing demand for organics in New Zealand.

“Customers are increasingly concerned about where their food is coming from and how it is produced. Organic certification gives them assurance about environmental impacts and the way food is produced.”

Vosper says the farm went organic “as it fitted our farming philosophy and we hoped to increase returns”.

“Our milk is pasteurised to eliminate bugs; it is not homogenised. In the vending machine the milk is kept cold, dark and stirred.

“Jersey Girl milk is audited to strict organic standards. You can be sure the milk is free of antibiotic, herbicide and pesticide residues.”

The farm runs a herd of 250 pedigree Jersey cows, producing about 800,000L; surplus milk is sold to Fonterra.

On the system 2 farm the Jerseys graze on organic pasture, supplemented with hay, silage and maize cut from local paddocks.

A support block was used to graze replacements and produce silage. Vosper says after a series of dry summers the farm started growing maize for silage, giving more options for feed.

“Maize paddocks are planted in permanent pasture consisting of a diverse species mix. After a few years of decreasing pasture production we now have a fertiliser policy of maintaining nutrient levels in the soil and spend above-average amounts on fertiliser.”

The farm calves about 200 cows in spring and 50 in autumn; usually about 55 heifer replacements are reared.

Cows are milked in a 20-bail rotary.

Vosper says animal health is challenging at times as any animal that has a prohibited treatment has to leave the farm. “In future we will be placing more emphasis on animal health traits in sire selection.

“Last October we did four weeks of Jersey semen followed by eight weeks of using short gestation sires. Our empty rate was 10%.”

The Vosper family has been farming on Cleavedale farm for five generations.

“We love the land we live on and the animals that share it with us; we take pride in producing a top quality milk in a way that honours natural processes.

“Organic production methods require committment and energy. There are no shortcuts, no artificial fertiliser, no production line fast tracking, no modifications.”