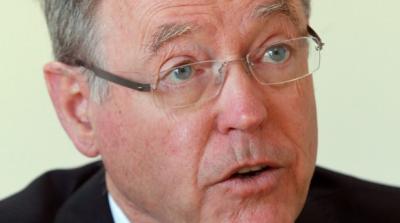 Nobody today in so many different roles and for quite so long has stood at the centre of public life so enduringly as Don Brash. Economist, businessman, banker, politician, the former Governor of the Reserve Bank and leader of the National Party has defied typecasting. At one and the same time severe yet extravagant, austere yet colourful, scholarly yet populist, he has contrived always to reconfigure himself around the times. Now he has stridently intervened in institutionally-fuelled separatism. Shrouded in a protective veneer of high-minded fashionable purpose that makes ordinary people fearful to question it, Dr Brash vehemently, unequivocally declares the voguish syndrome as ultimately destined to tear the nation apart......

You are often considered to be at heart primarily concerned with matters economic and their corresponding data. Yet here you are now immersing yourself in what many might consider a socio-ethical issue?

Yes, most of my career has been about monetary policy, banking, and economic issues more generally. But my interest in economics has always been because of my interest in the well-being of society more generally. I have long felt, for example, that it will be difficult or impossible to maintain a broadly egalitarian society in New Zealand – the kind of society in which I was brought up – if average living standards fall too far below those in Australia because of the ease with which skilled New Zealanders can cross the Tasman for very much higher incomes in Sydney or Melbourne.

If we want the kind of healthcare which those in advanced developed countries take for granted, we have to have the living standards to support that healthcare. A few years ago, there was a big debate about whether Pharmac should subsidize the provision of Herceptin for the treatment of certain kinds of breast cancer, and it was noted that Australia did so. The fact of the matter was that at that time virtually all the countries which subsidized access to Herceptin had higher living standards than New Zealand did; those which did not provide a subsidy, had lower living standards – we were right on the cusp. For me, interest in economics has always been about the implications of economic policy for the well-being of society.

Hence, I was strongly opposed to inflation in part at least because of the totally capricious effects which inflation has on wealth distribution – those who save in fixed interest instruments being thoroughly gutted by inflation, while those who borrow heavily to invest in, say, property, make huge and totally untaxed gains with little or no effort. That has always seemed to me to be grossly unjust.

Will the Hobson’s Pledge Movement become a force in the pending general election?I certainly hope so. I find it very depressing that the National Party has moved such a long way from its roots in this policy area. In 2002, Bill English gave a lengthy and very thoughtful speech, demonstrating clearly that Maori chiefs had ceded sovereignty in signing the Treaty and arguing that the only way for a peaceful future for New Zealand was a “single standard of citizenship for all”.

In May 2003, he pledged that a future National Government would scrap separate Maori electorates, as the Royal Commission on the Electoral System had recommended in the late eighties if MMP were adopted. I made similar commitments when I was Leader of the National Party, as did John Key in the election campaign of 2008. And yet we’ve seen the National-led Government retreat a very long way from that position.

I applaud the fact that the current Government has accelerated the resolution of historical grievances, but utterly deplore the fact that too often resolution has involved not just financial redress but also “co-governance”.

We see the proposed amendment to the RMA requiring all local councils to invite their local tribes into so-called “iwi participation agreements”, involving co-governance on a grand scale. We saw the legislation establishing the Auckland super-city requiring an Independent Maori Statutory Board, with the Auckland Council giving members of that unelected Board voting rights on most Auckland Council committees.

We see the Government negotiating behind closed doors with the so-called Iwi Leaders Group to give tribes some form of special influence over the allocation of water, despite pretending to believe that “nobody owns water”. We see a proposal to make half the members of the Hauraki Gulf Forum tribal appointees.

The myth that the Treaty of Waitangi created some kind of “partnership” between Maori on the one hand (or more accurately, those who can claim at least one Maori ancestor, always now along with ancestors of other ethnicities) and the rest of us on the other is increasingly accepted as Holy Writ, subscribing to which is becoming essential for many positions in the public sector.

So I’m very much hoping that Hobson’s Pledge can help to substantially reverse this highly undemocratic drift after the next election.

You say that the National government is “pandering” to “separatist demands.” Which of these demands do you consider the most dangerous?

Where do I start? I’ve just listed some of the specific policies which are totally inconsistent with any reasonable definition of democracy. Most of those specific policies stem from the underlying myth that the Treaty established some kind of “partnership” between those with a Maori ancestor and those of us without, as I’ve just mentioned. But as David Lange said in the Bruce Jesson Memorial Lecture in 2000, “the Court of Appeal once, absurdly, described [the Treaty] as a partnership between races, but it obviously is not. The Treaty itself contains no principles which can usefully guide government or courts.... To go further than that is to acknowledge the existence of undemocratic forms of rights, entitlements, or sovereignty.”

All the specific examples I gave in answer to the previous question stem from the underlying nonsense that there are two (and only two!) distinct groups of New Zealanders, those with preferential constitutional rights and those without them. This is leading New Zealand to disaster with a whole generation of part-Maori believing that they really do have superior constitutional rights to the rest of us.

To what degree would you ascribe this separatist development agitation as being primarily a project of the political class from whatever background?

Certainly, I think what you call the “political class” is the main driver of this separatist agitation, together with arguably most of the educational establishment, where adherence to so-called “Treaty principles” seems to be an absolute prerequisite for appointment to any teaching or leadership position.

The same is true in the public healthcare sector. But there is plenty of evidence that large numbers of the “general public” do not support the separatist agenda but are literally cowed into silence on the issue.

I regularly get people sidle up to me in the street and, after looking furtively up and down the street lest they are recognized by friends or acquaintances, tell me that they strongly agree with me. One university professor did this recently, but swore me not to mention his name or university department. And some of these people are Maori.

Of course, Hobson’s Pledge has two official spokespeople, one of whom is me and the other is Casey Costello, a woman of Ngapuhi and Anglo-Irish ancestry. But two of our very strongest supporters (though not members of our council) are Maori – one a prominent member of the Ngapuhi tribe and the other Ngati Porou.

He resents the separatist agenda because he believes strongly that it is patronizing, implying that Maori aren’t quite good enough to make it successfully without these constitutional preferences.

Bearing in mind your underpinning career in banking, economics and looking now at the broader picture: where is the country now in your view in terms of nuts and bolts things such as balance of payments and foreign debt?

Compared with some other countries, we are in a good spot, with the economy growing, unemployment fairly low and government debt modest relative to GDP. Our banking sector is in reasonable shape. Even the extent of the country’s (public and private sector) total net external indebtedness is somewhat better than it was a decade ago, though still high by developed country standards.

But there are significant problems just below the surface of that apparently rosy picture. Yes, the economy is growing, but that is largely because the number of people in the workforce is growing strongly because of a high level of net immigration: productivity, and thus per capita income, is growing very slowly indeed, and the Government’s initial objective of closing the income gap with Australia by 2025 is not only not going to be achieved, the gap hasn’t reduced materially over the last eight years.

The ratio of government debt to GDP is modest by the standards of many other developed countries, but the Key Government did absolutely nothing to prepare the population for the need to adjust, for example, the age of eligibility for New Zealand Superannuation if government debt is not to explode, relative to GDP, over the next few decades. (Mr English, to his credit, has refused to renew Mr Key’s pledge on this issue.)

And while the country’s net external indebtedness, relative to GDP, has improved somewhat in recent years, that external indebtedness remains at a high level, the consequence of New Zealand’s running a current account balance of payments deficit every year since 1974. Much of that deficit has been funded by banks borrowing on the international markets to fund the explosion of private sector housing debt, the result in turn of another serious policy failing, the failure to deal with the enormous increase in the price of housing (or more accurately, of residential land).

|  From the This email address is being protected from spambots. You need JavaScript enabled to view it.  | Friday 3 March 2017  |

More in this category: « New Zealander assists German Government with official biography of his Grandfather who was last Politician who could have stopped World War 2 Being Entrepreneurial: “Figuring out what one might do, is not the same as having the courage to do it, and courage can’t be taught” »
back to top
Mar 20, 2018