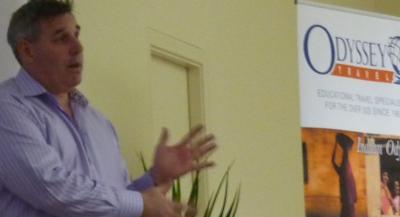 Tailored around the knowledge-seeking experience Odyssey’s expeditionary-style tours are sharply defined around just a few time-frame durations, notably of nine and 30 days.

Focussed on the 50 plus age sector Odyssey’s concentration on the exclusivity of small travelling groups means that the operator can mould its offerings to conform to traveller preference rather than the other way around.

The Sydney-based Odyssey is owned by the Australian and New Zealand universities.

In an academic-dimension lightbulb moment a generation ago these universities conjured forth Odyssey because saw the future in adding an adventure element to what had previously been academic field trips.

In recent years Odyssey CEO Mark-Banning Taylor (pictured) has tightened up still further on this sharp destination emphasis by sending tours into regions which people have long read about, but who have never encountered anyone who has actually ever been there.

These destinations include nations such as Togo and Benin, Madagascar, and Papua New Guinea.

He has similarly sharpened his profile on inward tours by emphasising subject areas over destinations, basing them for example on studies of Australasian ethnicity, arts, flora and fauna, photography, pioneering, and so on.

In fact he has let expire the organisation’s agency arrangements in order to concentrate on Odyssey’s own inward intellectual tours.

He has similarly enhanced the perspective on Odyssey’s outward tours.

For example, with the resurgent interest in battlefield travel, those of antiquity to those of modern times, Odyssey has expanded its range of tours encompassing the Pacific theatre, North Africa and Europe.​Odyssey has also nudged still further to their geographic extremities its standard tours to the Russian/Asian landmass.

Iran is a particular thrust at the moment, with departures guaranteed years ahead for these small groups.

According to Mr Banning-Taylor the objective is to implant tour members directly into the environment and its culture with the minimum of distraction.

This applies across the swathe of the tours including such mainstays as the one that “Island Hops” through Scotland’s Western Isles.

Here members will find themselves lodged in remote crofts and listening to Gaelic as part of everyday life.

A particular strength of Odyssey is considered to be its carefully selected local guides who must be local residents and accredited to a tourism authority.

Similarly the company’s tour “leaders” as they are described are drawn from those who have had a vocational, often academic, association with the region being visited.

The tour planning starting point tends to be at the learning end rather than with the destination itself.

In other words, what are party members going to acquire in a knowledge sense from their experience that they did not know before?

Observes Mr Banning-Taylor: “We ask ourselves, ‘what do people of curiosity really want to discover, see for themselves?’ “

This is a particular characteristic of the Odyssey inward tours which deliberately cater for these special fine-focus interest groups.

Aside from the obvious ones of terrain, settlement and ethnicity, we also find, for example an emphasis devolving onto governance, national character, and how these came about.

One example is a tour for those curious about Australian literature.

Here, the tour takes in visits to the homes in which the authors once lived and takes party members through the institutions and landscapes that determined their output.

This fine-slicing embraces broader gauge interests such as the tours of Australasian distinctive cuisine and wine regions that are sectored into regional specialities, terroirs and marques.

Odyssey according to Mr Banning-Taylor, seeks always to put plenty of distance between what it offers its travellers and the general Australasian tourist concept of looking at the familiar sights.

In its central Europe offering for example is one on the Hapsburgs with reference to their pioneering role in the entertainment industry as we know it today.

It turns out that this is a variant on the usual Danube type of experience insofar as it takes into account the little-understood fact that it was the Hapsburgs who liberated live entertainment and thus gave the world Mozart and Beethoven among other luminaries.​Similarly a tour of Provence features this connectivity between past and present with an emphasis on the walled cities of Avignon and Carcassonne which turns out to be where the global heritage and conservation movement as we know it had its beginnings.

Odyssey’s intellectual point of embarkation features a notable sociological emphasis that some may interpret as downright serious.

For example a South American tour is one into Peru centred on the influence of women in regard to the matrilineal nature of the Inca society which was pretty much wiped out by the patriarchal Spanish colonisers.

The tour includes contemporary manifestations of the subsequent resurgence in the status of women especially in textile design and development, thus blindingly indicating the linkage between perceived economic value and civil rights.

Symbolically the expedition is capped by two nights in the middle of Lake Titicaca on Suasi Island owned by a prominent Peruvian womens activist.

In operational terms an enduring shared worry of both providers and their clients is that offered tours will in fact not take place because they are under-subscribed.

It is no consolation to would-be travellers that their deposits will be recovered should there be insufficient bookings to launch it. Time has been allocated, arrangements made.

To this end Odyssey from its long experience categorises certain tours as guaranteed.

Other tours such as the pioneering ones into the paths less travelled are cited as being dependent on a minimum number of takers, usually as low as three people.

A recent tour to see the world’s largest ever dinosaurs in Argentina is just one example “You could say that we are in a joint venture,” noted Mr Banning-Taylor

“A client seeks from us a memorable experience—it is up to us to be candid about the need to find a few others who wish to share in it.”

He summarises the Odyssey endeavour as being quite literally one of an applied taste test.

“Would your Odyssey travellers’ tales stand up at a dinner party; command some attention?

“We like to think that if you have been on an Odyssey tour, then, yes, they would.

“Our objective is taking travel quite some distance beyond sightseeing.”

It is known that Odyssey via its board allocates surpluses to university types via a series of cash scholarships for students across New Zealand & Australia of AUD$10,000 who demonstrate financial need and academic performance.

More in this category: « The MSCVoxPop App Winston Peters Knows that Journalists would rather be Scolded than Ignored »
back to top
May 16, 2018