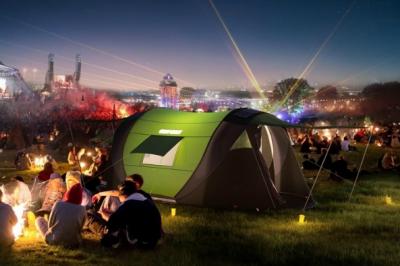 Cinch is the brainchild of Jake Jackson, an avid camper and entrepreneur from Lancaster in the United Kingdomwho set out on the mission to find the perfect tent for festival-going.

His search was thwarted when he was unable to find one which did everything he wanted it to. Jake’s vision was ambitious, yet simple: a tent should make camping fun, easy and cheap – not suck away your time, money and sanity.

He wanted power. He wanted to access his tent from both the back and the front. He didn’t want to trip over guide ropes or tent pegs. And he wanted to be able to stand up!

So in true entrepreneurial fashion, when he couldn’t buy what he wanted, he set out to make his own. And Cinch was born.

“The concept behind Cinch came from me not being able to find what I wanted on the market,” said founder Jake Jackson, “I loved the idea of a pop up for the festivals I was attending but there was nothing out there that suited my needs fully so I went about designing my own.”

Setting off on a one-man-mission, his first step was to design his perfect tent and get some samples made, which any designer will tell you, is a challenge in itself.

“I sourced different factories and got some samples made up,” he added, “I then got a small test order which went well and made constant changes over the space of a year or two to get the tent to more of an advanced concept.

“We field tested them, listened to customers and changed them accordingly. The most difficult thing was finance to get the project off the ground. It is not really a business that you can start off with too small and scale up steadily, you have to start the business on a much larger scale for it to work.

“I tried for a good couple of years to find funding for the project but due to the economic climate there was no money available for new businesses and ideas. This is when we decided to crowd fund to get the project off the ground and it went amazingly well.”

With his designs ready, Jake took to crowdfunding platform Kickstarter in a bid to fund the project and was overwhelmed by the response. The campaign raised £30,000 in just 14 minutes and became one of the fastest raises ever to appear on the website. Jake decided to extend the campaign and went on to raise a total of £366,905 from 1,341 private investors.

“I’ve had a great experience with crowdfunding,” he said, “but not all of my experiences have been great, I’ve learned a lot along the way. I wasted a lot of time and money making the wrong decisions but always learning from them.

“It’s certainly not easy and you can’t just expect something from nothing with crowdfunding, you have to put the work in, no matter how good you think your product is. Our approach to crowdfunding was to get the product out there before the campaign and gather momentum, this is the hardest thing to do.”

Cinch is now on target to launch its first range of solar powered pop-up tents early next year and Jake has ambitious plans for the future.

He added: “The reception so far has been unbelievable, our customers are so enthusiastic and I really do think it’s got people camping that maybe would have not bothered previously which is fantastic.

“The plans are now to continue to develop the tents and the expand the range. It would be great to develop Cinch into a world wide lifestyle brand that is recognised for the coolest innovative products.”

More in this category: « The best smartphone tech coming your way in 2017 Tesla Gigafactory begins production »
back to top
Jul 05, 2018