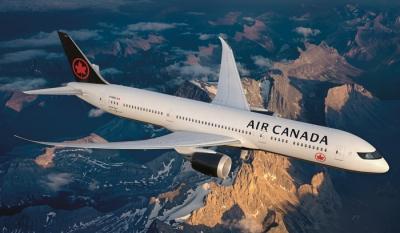 Air Canada has unveiled a bold new livery inspired by Canada for its entire fleet, elegant new uniforms for its employees, and a taste of some of the new on-board menu offerings that its customers can look forward to.

“On the occasion of Canada’s 150th anniversary year, with our new livery, new uniforms for our employees, the award-winning international cabin standard introduced with the launch of our Boeing 787 aircraft, and enhanced on-board offerings, the future Air Canada represents the strength of our nation and the future-looking spirit of our airline.

“On behalf of our 30,000 employees world-wide, it is a privilege to fly Canada’s flag, and we are proud to showcase some of the best of this nation’s talent as we continue to expand Air Canada’s horizons to fly to more than 200 destinations on six continents.”

Air Canada’s fleet of 300 mainline and regional aircraft are being repainted in a bold black and white design that highlights its iconic red maple leaf encircled ensign, or “rondelle,” that returns to the tail of the flag carrier’s fleet after an absence of 24 years.

In 2016, Air Canada significantly increased its global footprint with the launch of 28 new routes including 15 new international and 12 US trans-border routes.

With new service to Morocco, the airline joined the elite club of global carriers serving all six continents.

In 2017, Air Canada and Air Canada Rouge will continue its global strategic expansion.

To date, Air Canada has taken delivery of 23 new Boeing 787 Dreamliners with 14 more planned by 2019 – all offering the new international cabin standard.

Find out more about the design overhaul in this Air Canada guide.

More in this category: « Airbus to test a flying car by end of 2017 How Emirates SkyCargo transports flowers around the world »
back to top
Apr 12, 2018