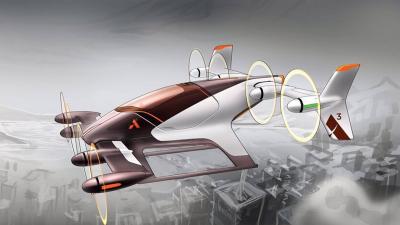 Airbus is planning to test self-piloted personal aircraft by the end of the year as a way of reducing traffic on inner-city roads.

The announcement was made by the aerospace group's CEO, Tom Enders, on Monday at the DLD digital tech conference in Munich.

During his keynote speech, Enders said Airbus is investing in driverless technologies and artificial intelligence, which could lead to them developing a fleet of flying cars.

"One hundred years ago, urban transport went underground. Now we have the technological wherewithal to go above ground," he said, adding that he believed the company would be testing flying single-person transport by the end of the year.

"We are in an experimentation phase. We take this development very seriously," he said. "If we ignore these developments, we will be pushed out of important segments of the business."

Enders also noted how the development could affect city planning and infrastructure, saying that flying means you don't need to "pour billions" into concrete bridges and roads.

The personal aircraft is being explored in Airbus' Project Vahana. The project grew out of the company's Urban Air Mobility initiative, dedicated to less-conventional vehicle concepts, like vehicles to transport individuals or helicopter-style vehicle that carry multiple riders.

The aim would be for people to book the personal aircraft using an app, similar to car-sharing schemes such as Uber.

Airbus has also been working on "vertical take-off and landing" (VTOL) technology that would allow vehicles to pick up passengers in busy urban areas, and has said it expects to be putting them into production by 2021.

"We seek to help enable truly vertical cities by opening up urban airways in a predictable and controlled manner," said the company in a blog post.

"We believe that full automation will allow us to achieve higher safety by minimising human error. Our aircraft will follow predetermined flight paths, with only minor deviations if obstacle avoidance is needed."

"We've got these electric drones flying around everywhere," he said. "[Electric planes are] just a scaled up version really. I think that's going to get really interesting – it could be the beginning of personalised transportation."

"It's like going back to the idea of jetpacks, but with lots of little drones," he added.

Airbus has filed a number of unusual patents over the years. In 2014 the company applied for a patent on bicycle-style seats that would replace seat cushions with saddles, and in 2015 filed one for two-storey passenger seating that would make the most of unused cabin space by stacking travellers one on top of another.