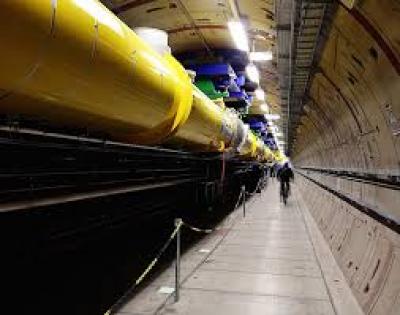 Just outside of Hamburg, a monumental experiment is finally coming to life.

Named the European X-ray Free Electron Laser (XFEL), the 1.5-mile-long experiment has produced its first laser pulses, signaling that the project is nearly ready for its experimental debut.

According to reports by the Deutsches Elektronen-Synchrotron (DESY), which operates the laser, the XFEL has produced its first pulses of 0.8nm laser light at a single pulse per second. With this demonstration, the researchers believe that in the coming months they’ll be able to ramp up the lasers pulse frequency to its final state of 27,000 pulses per second.

"The European X-ray laser has been brought to life! The first laser light produced today with the most advanced and most powerful linear accelerator in the world marks the beginning a new era of research in Europe,” said Helmut Dosch, chairman of the DESY Directorate. “The European XFEL will provide us with the most detailed images of the molecular structure of new materials and drugs and novel live recordings of biochemical reactions."At the core of the XFEL is an electron beam generated by a superconducting linear accelerator. A 2.1 kilometer (1.3 mile) accelerator tunnel, accelerates electrons to relativistic speeds along the length of the passage.

The electrons then enter a 210 meter (689 foot) stretch of the experiment where X-ray generating devices built around 17,290 permanent magnets twist the beam. By taking the straight-line electron beam and giving it a rotation through forced magnetic pulses, the researchers are able to create short wavelength X-Ray particles.

These incredibly energetic X-ray pulses carry with them a high degree of luminosity and thus can be used for the various laser experiments that litter the XFEL experimental hallway.

According to DESY, once the laser is fully operation, in September, researchers will begin using it to make pictures and films of “the nanocosmos at atomic resolution.” Beyond biological and medical research, these films might also be capable of showing researchers what conditions within the interiors of planets might be like, lending better understanding of now frequently discovered exoplanets.

For more record-breaking engineering, learn about the World’s Largest Pool for Space Research.