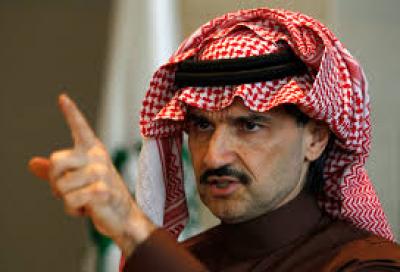 Take for example Prince Al Waleed (pictured), the best known of them.

His Kingdom Holdings is an on-off shareholder in News Corporation and its related companies.

Goldman Sachs and Credit Agricole are two other banks closely associated at various times with Kingdom Holdings and which figure in the Australasian financial world.

Kingdom has been a keystone investor in two entertainment companies widely credited with putting the Australasian film industry on the global map, AOL Time Warner and Disney.

Extending beyond its value investing path, Kingdom Holdings branched into real estate and construction a sector especially prone in the Middle East to land grabs and undeclared commissions

The other most prominent detainee in Australasian terms just because there are so many third and fourth generation Lebanese living here was the prime minister of Lebanon Saad Hariri.

In an artful piece of dissimulation the accepted reason for Mr Hariri’s sequestration was his role in the balance of power within the sectarian coalition that is required to maintain the peace in the volatile nation.

It is Mr Hariri’s role with his family’s immense construction company that operates in Saudi Arabia that represents a much more proximate cause as to why he found himself caught up in the round-up.

The success of the dragnet was that all those enmeshed in it were unaware that it was being set in place, and that all were then enticed into it. .

The official reason for the round up remains the one centred around corruption practised by the ultra-privileged.

The nearest thing to an official piece of data emanating from Riyadh is that the state intends to recover $100 billion worth of reparations from the sequestered i.e.those who have been party to padded related party dealings.

Curiously this $100 billion in reparations from the individuals under what appears to be hotel-arrest corresponds to another widely accepted figure of $100 billion.

This is the value that the Saudis are said to be place on the outcome of the projected stage one IPO of Aramco.

The flotation said to be imminent envisages floating five percent of Aramco.

International financial markets share a unanimity in estimating the Saudi’s own estimate of Aramco in its totality as $2 trillion.

Exactly what considerations Mr Haariri gave his detainers in reaching the $100 billion funds restoration target will never be known. But his early release from the synchronised round up indicates that he was able to make an accommodation.

Prince Al Waleed is the most western friendly of all the detainees, and the one who probably least expected to be detained, and especially so in such a coordinated round up involving so much planning which under normal circumstances he would have received early warning of.

His biggest mistake was in his political forecasting which took the form of tweeting the world at large that US presidential candidate Donald Trump was a “disgrace” and should withdraw from the race.

At an earlier stage the two had had dealings when the Prince acquired the Trump yacht, and also New York hotel capacity.

Prince Al Waleed since he launched Kingdom Holdings has pretty much stuck to the Warren Buffet playbook of value investing which centres on investing in high brand recognition public companies likely to hold their value in market gyrations.

These include many United States multi-nationals.

Saudi sovereign funds at face value give the appearance of being on a par with those of Norway’s.

The sale of Aramco would change all this and put the Saudi fund into an unchallengeable supremacy.

The princely round-up, especially in terms of its simultaneous implementation on all the suspects, has the characteristics of an operation designed to stem the flow of capital and also to repatriate capital.

This will give the Saudi monarchical inner circle a clean slate, a cash float for a much bigger float, on which to launch what amounts to a financial services economy.

| From the This email address is being protected from spambots. You need JavaScript enabled to view it.  || Monday 11 December 2017   |||