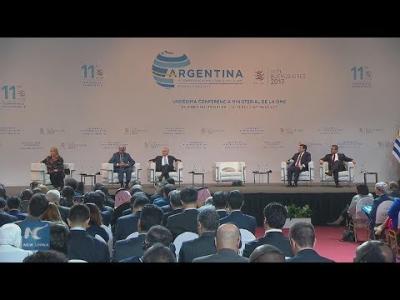 Dec 15, 2017  -  The 11th Ministerial Conference (MC11) of the World Trade Organisation (WTO) concluded today in Buenos Aires, Argentina.  “Going into this meeting we were apprehensive about what the membership could deliver. There’s a lot of concern in the world about where some of the big countries are heading on trade and whether the framework of rules we have for international trade is fit for purpose, now and for the future” said Minister for Trade and Export Growth David Parker.

“We’re pretty disappointed that on agriculture, the Conference wasn’t ready to agree to cap the subsidies that major countries give their agriculture sectors, which distort world markets and disadvantage not just our farmers but subsistence farmers in developing countries.

“Nor was there a willingness to implement rules to make the regulation of services more transparent, predictable and accessible. But I’m heartened that on both issues, members are keen to keep working, so the huge effort made to advance these negotiations since the last conference hasn’t been wasted. “

Minister Parker considered that some progress has been made on two environmental issues. “I believe that trade policy can contribute to global environmental solutions and sustainable development. New Zealand has a leadership role here. So I’m really pleased that yesterday, we started a dialogue to encourage the WTO to address the global harm being caused by fossil fuel subsidies.

Mr Parker led the effort to deliver a Ministerial statement to the WTO on Fossil Fuel Subsidy Reform (FFSR). Endorsed by twelve other WTO Members, the statement confirms the benefits for development, trade and the environment of fossil fuel subsidy reform. It includes a commitment by New Zealand and its supporters to bring the issue into the WTO.

“We were also able to take a step toward prohibiting harmful fisheries subsidies in time to meet the 2020 deadline set by Leaders’ in the United Nations Sustainable Development Goal (SDG) 14.6. “Fisheries subsidies are a major driver of the crisis in global fisheries. Two thirds of global stocks are overfished or fully fished. Harmful subsidies have increased and fish stocks have deteriorated.

“While this week we fell short of locking down what is needed to implement SDG 14.6, members agreed that they will conclude negotiations to prohibit these kinds of subsidies before 2020. To achieve this we will need to continue negotiations toward an agreement in 2018.

Interested Members including New Zealand also agreed to continue their discussions on e-commerce and how to make trade rules deliver more for micro and small exporters.

“You never get everything you want in trade negotiations” said Mr Parker. “But overall, I’m optimistic about where we’ve ended up. At a time of considerable global uncertainty, the WTO’s members have re-confirmed how important the organisation and its rules are for their economies and their citizens.”

More in this category: « Chemicals and plastics lift manufacturing – Boost for road safety this summer »
back to top
Oct 22, 2018