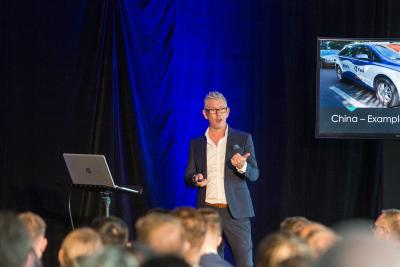 NZTech board member and winner of last year’s New Zealand CEO of the Year Award, Leigh Flounders has been hand-picked by Dubai’s big bank Emirates NBD to take over as senior vice president, head of digital strategy.It’s just another example of how sought-after top Kiwi tech talent is viewed overseas, like Craig Nevill-Manning a New Zealand computer scientist who founded Google's first remote engineering centre in midtown Manhattan, where he is an engineering director.Flounders says one of the ways that Kiwi businesses beach head overseas markets is often through existing executive networks such as Kea world class New Zealanders and the NZTech network.“As I am retaining positions on both NZ industry groups, this expands both networks further into Dubai,” he says.  “Kiwis are highly connected and are constantly looking for two-way flows on information. The United Arab Emirates (UAE), and Dubai in particular, are developing faster than nearly any other global technology market.

“Emirates NBD is a global bank, and for NZ Inc it is always great to have another Kiwi working at a senior level and delivering tangible positive change on the global stage.” Emirates NBD's total assets are worth about $US128 billion, has 230 branches and 1040 ATMs, with operations in the UAE, Egypt, Saudi Arabia, India, Singapore, the United Kingdom and offices in China and Indonesia. The bank employees more than 9000 people, representing 70 nationalities.Flounders says he is incredibly excited to be taking on a senior role at the bank. “Emirates NBD is widely regarded as the most digitally savvy bank across the UAE. My role revolves around working with emerging technology and delivering an infectious energy derived from the start up industry on the roadmap for the banks digital journey. “Much of my time will be spent communicating and delivery strategic insights on APIs, open data, IOT, blockchain, design thinking and effective innovation.

“Dubai is also hosting Expo 2020 and part of my role will be to drive some very exciting digital innovation that we can unveil at the event.” “I have worked, mentored, partnered and delivered products to large banks over the last decade, however it has been almost 15 years since I actually worked within a large financial services institution - the National Bank of New Zealand.

“This role provides the opportunity to grow back into a corporate and witness how executives can effect change for many widely varied customers. This gives me the opportunity to take a more considered approach to the fundamental effects of change within an incumbent financial institution.

“Often working in the start-up space or as a corporate vendor the outcomes you are looking to achieve are very specific and linear and the effects are contained and limited to one group. “Within large banking providers this is not the case and a more considered approach to innovation, perhaps even iteration is required, due to the dramatic outcomes of just small changes.

More in this category: « NZ Hi-Tech Trust seeking trustees to join the Board New-look Partner Awards to celebrate Kiwi tech solutions »
back to top
Jul 20, 2018