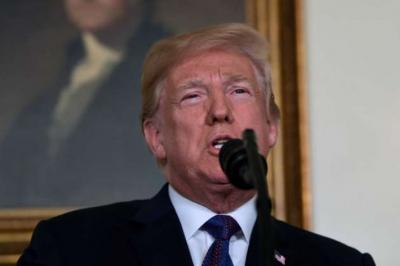 The coordinated strike marked the second time in a year that Trump has used force against Assad, who U.S. officials believe has continued to test the West's willingness to accept gruesome chemical attacks.

Trump announced the strikes in an address to the nation Friday evening.

The assault followed repeated threats of military action from Trump, who has been moved by civilian suffering to set aside his concerns about foreign military conflicts, since the reported chemical attack that killed civilians in the rebel-held town outside Damascus last weekend.

The operation capped nearly a week of debate in which Pentagon leaders voiced concerns that an attack could pull the United States into Syria's civil war and trigger a dangerous conflict with Assad ally Russia - without necessarily halting chemical attacks.

Both Syria and Russia have denied involvement in the attack, which Russian Foreign Minister Sergei Lavrov alleged had been staged.

The episode is the latest illustration of the hazards arising from a conflict that has killed an estimated half-million people and drawn in world powers since it began as a peaceful uprising in 2011.

The attack raised the possibility of retaliation by Russia or Iran, which also provides military support to Assad, threatening in particular to increase the risks facing a force of 2,000 Americans in Syria, as part of the battle against the Islamic State. While the United States has not been at war with the Syrian government, U.S. troops often operate in proximity to those from Iranian- or Russian-backed groups.

In the wake of last weekend's gruesome attack, some U.S. officials advocated a larger, and therefore riskier, strike than the limited action Trump had ordered in April 2017, also in response to suspected chemical weapons use.

That attack involved 59 Tomahawk missiles fired from two U.S. warships in the Mediterranean Sea. It fulfilled Trump's vow that chemical weapons are a "red line" that he, unlike his predecessor Barack Obama, would not allow Assad to cross. But the airfield targeted by the Pentagon resumed operations shortly after the attack and, according to Western intelligence assessments, chemical attacks resumed.

Assad's defiance has presented Trump with a choice of whether to make a larger statement and incur a larger risk this time. Planning for these strikes focused on ways to curb Assad's ability to use such weapons again.

Risks of a wider attack include the possibility of a dangerous escalation with Russia, whose decision to send its military to Syria in 2015 reversed the course of the war in Assad's favor. Since then, Russia has used Syria as a testing ground for some of its most sophisticated weaponry.

"Get ready Russia, because they will be coming, nice and new and 'smart!' " Trump tweeted Wednesday, referring to U.S. missiles.

That took miliary officials by surprise. But on Thursday, Trump said he did not mean to suggest missile strikes were imminent.

"Never said when an attack on Syria would take place," he tweeted. "Could be very soon or not so soon at all!"

A larger strike, possibly including stealth aircraft and strikes on multiple sites, could inflict lasting damage to military facilities and economic infrastructure that have been vital to Assad's ability to gain the upper hand in a seven-year civil war.

Since last year's strike, multiple chemical attacks have been reported in opposition areas, most of them involving chlorine rather than the nerve agent sarin, as was used in 2017, suggesting the government may have adjusted its tactics.

Among the chief factors military planners must consider are air defenses in Syria, which were bolstered by Russia's decision to enter the war in 2015 and could pose a threat should the Pentagon employ manned aircraft in the attack. Their reach was demonstrated in February when an Israeli F-16 fighter jet crashed amid Syrian antiaircraft fire.

The United States has flown an array of aircraft over Syria since it began strikes against the Islamic State in 2014, but those operations have mostly steered clear of government and Russian activities. The Assad regime has not authorized the U.S. operations, but it also has not tried to shoot down American aircraft.

More in this category: « Video: Why Trump’s Steel Tariffs are Stupid US will consult with China over tariffs »
back to top
Sep 05, 2018