A door of opportunity has unexpectedly opened to enable New Zealand prime Minister John Key tomaintain his upward trajectory in the form of becoming managing director of the International Monetary Fund.

The present managing director of the IMF Christine Lagarde (pictured) has become inextricably enmeshed in France’s Tapie Affair and has been ordered to stand trial for her alleged part in it.This coincides with a move to place a non-European official at the helm of the IMF. This originally came about in order to position someone from a BRICs nation at the helm. But nobody has been forthcoming from these nations, possibly because of their objective of becoming independent of it. 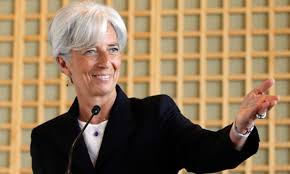 Step forward Mr Key who also has the essential background in Wall Street international finance.Earlier Christine Lagarde had been expected in mid 2016 to renew her mandate with the IMF. However she has now become the latest in a long line of high level French officials to have become rolled up in the Tapie Affair.This centres on Bernard Tapie a onetime member of the Mitterand government, a celebrated sportsman and entrepreneur, who had gamed Adidas eventually though having to hand it over to a consortium which included Credit Lyonnais.In the event this group made a substantial profit on the deal, which Tapie now claimed. Amazingly he was successful.The problem was that Credit Lyonnais was now back in public hands. So Mr Tapie’s payout which approximates to $500 million was derived from the pockets of French taxpayers.The other enduring problem in the 20 year affair was that instead of the matter being referred to the courts, it was placed in the hands of private arbitrators.Christine Lagarde was minister of finance at the time and is thus being accused of signing off on the arrangement.Mr Tapie has now been ordered to pay back the money.The IMF stems from Bretton Woods, as does the World Bank. Curiously the IMF acts as a bank. The World Bank, as a fund.The World Bank is traditionally under United States direction. The IMF under European, as a counter balance.Nobody doubts though that White House approval is required for the leadership of both organisations.Mr Key has the required money market experience. He has run a country. He has backed President Obama’s showpiece international thrusts, the TPPA, and the Paris Climate.He is known to be on personal terms with President Obama who will have the ultimate sign-off on the IMF leadership.Politically Mr Key leads a centrist party and long-running government and above all one which features favourably at the top of all the internationally “transparency” tables.

More in this category: « Bill English will be confirmed as New Zealand Premier. National Government Dream Team Debuts »
back to top
May 16, 2018