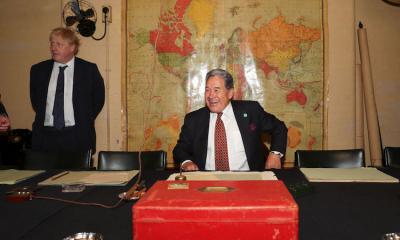 Journalist, broadcaster and former member of the press gallery Guyon Espiner analyses New Zealand’s foreign policy, and how it must look to outsiders, in the first of a new fortnightly column for RNZ.

To outsiders New Zealand foreign policy must look like a riddle wrapped in a mystery, perhaps clear only to the enigmatic deputy prime minister and New Zealand First leader Winston Peters.

That phrase is, of course, butchered and borrowed from Winston Churchill, who was trying to decipher Russian intentions at the start of World War II.

The direction of New Zealand foreign policy under his namesake seems similarly opaque. This presents challenges for Prime Minister Jacinda Ardern, in Paris and London this week, seeking to progress trade deals with the European Union (EU) and Britain.

The publicity from the trip is likely to be positive but beyond the photo-ops, what is New Zealand actually doing in foreign affairs?

Unfortunately for the PM the narrative has been blown off course by the timebomb Peters placed in the coalition agreement – his wish for a free trade deal with Russia.

It was France and Britain, two of the big stops on Ardern’s trip, who joined the US in missile strikes against the Russian-backed Syrian regime, in retaliation for gas attacks.

Against a back drop of Russian-Western conflict not seen since the Cold War, uncomfortable questions follow Ardern around Europe. Why, just weeks ago, was her country still clinging to the notion it could pursue a trade deal with Russia? Why did it take so long to drop the idea and why was it there in the first place?

One is a Cabinet minute saying National breached process in its condemnation of Israeli settlements in Palestine. The other outlines a Commonwealth economic partnership and the Russia FTA, which had been pursued by National but put on hold in 2014 after Russia’s military action in Ukraine.

The demand to re-start the deal didn’t come from a free trade champion. Peters has largely opposed FTAs, including with South Korea and China.

Why he wanted the Russia deal remains an unwrapped riddle but it does mean New Zealand’s stance on the global flash point of Russia has been second guessed at every turn.

Why did Peters cast doubt on Russia’s role in bringing down MH17 and meddling in the US elections? Why did the government insist there were no Russian spies here and buck the trend of its allies, who expelled Russian diplomats?

The questions continue after the missile strikes on Syria. While Australia’s Malcolm Turnbull and Canada’s Justin Trudeau support the strikes, New Zealand “accepts why” they occurred.

Perhaps this is what you’d expect from a coalition government with Labour at the helm. Rather than blindly follow their Five Eyes friends they seek an independent path. That line can be traced from Helen Clark’s refusal to join the Iraq War in 2003 to the actions of David Lange and Norman Kirk in protesting nuclear weapons.

In that context Ardern’s stance seems clear but when you add in New Zealand First it becomes less so. What is it that Winston Peters wants to achieve in foreign policy?

Among the first of his stated aims was improving the relationship with Australia. Given the fallout over New Zealand pressing its case to take refugees from Manus Island that looks a difficult box to tick.

Both New Zealand First and Labour opposed the TPP in opposition and then supported it in government with minor amendments. The tweaks allowed them to ban foreigners buying New Zealand houses but that breached the existing FTA with Singapore. Will Singaporeans be exempt from the ban? Peters stopped by Singapore on his way to Europe this week. Has he settled it?

And what of China? Why has the prime minister not planned a visit to our second biggest trading partner at a time when we are supposed to be upgrading the China FTA?

Will it be the job of Winston Peters to take the relationship forward? The deeper question is why he wants the job at all. The Greens chose portfolios which visibly align with their philosophies, such as climate change and conservation.

For the leader of a party called New Zealand First, which positions itself as a champion of provincial battlers, to take international affairs is a less obvious fit.

On the night he announced the government, Peters made dark noises about the failings of capitalism and the challenges facing the economy. And then he chose Foreign Affairs.

Usually that is a supporting role to the prime minister, who is the country’s real voice on foreign policy. Peters could soon hold both jobs, while Ardern takes maternity leave. Perhaps he’ll hand over foreign affairs to his under-secretary and party deputy Fletcher Tabuteau? Or maybe he’ll keep us guessing.

Publishing your news is good for your business

More in this category: « Clean energy a regional development opportunity Processes to be strengthened »
back to top
May 17, 2018