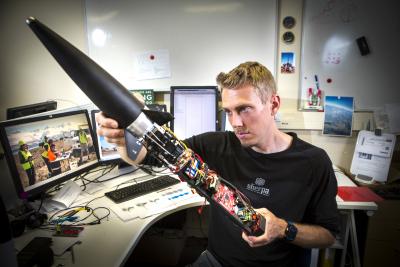 New University of Canterbury research has the potential to make it easier, faster and cheaper to launch a rocket, with wide-ranging benefits for other technology.

A new flight strategy has the potential to make launching rockets into orbit cheaper and more efficient, improving everyday technology like mobile phones and Global Positioning Systems (GPS), according to UC researchers.

A major challenge of launching rockets is fuel movement within the tanks affecting the trajectory of rockets through resonance. Heavy mechanical rings inside fuel tanks, called baffles, are the favoured solution to dampen the slosh of fuel and its effects on flight trajectory.

University of Canterbury doctoral student Philipp Sueltrop, in Electrical and Electronic Engineering in UC’s College of Engineering, is working to prevent the effects of fuel slosh in rockets using mathematical algorithms, by predicting movement and adjusting the flight movement before fuel slosh becomes a problem.

“It’s about performing the right movement at the right time,” Philipp Sueltrop says.

He has observed slosh and rocket motion behaviours using a vertical wind tunnel on campus at UC and real-life launches conducted in partnership with Rocket Lab. After collecting enough data to accurately predict fuel slosh under different movements, Philipp will ‘on board’ the algorithm into the flight control computer.

At that stage real-life launches will be used to gather data and record how the algorithm could influence the flight strategy and compare these findings to what was observed during testing in the wind tunnel to prove the effectiveness of the algorithm. If successful, this could reduce or completely remove the need for baffles in fuel tanks. Philipp recommends slowly introducing the algorithm into real flight to reduce risk.

“Making the move into real flight means fully converting the algorithm into a flight version that takes into account elements, including acceleration, that are not present in the wind tunnel. The algorithm is very flexible and easily scalable.”

The foundation for the algorithm was originally designed by Philipp’s supervisor, UC Engineering academic Dr Chris Hann, for the medical field.

“The underlying mathematics were first developed for glucose control and cardiovascular management in the Christchurch Intensive Care Unit. It was then transferred to the field of rocketry. The analogy is that insulin is used to control glucose where in a rocket you have canards which control the direction of the rocket,” Dr Hann says.

Philipp is enthusiastic about the algorithm’s future prospects.

“It is a long-term solution to make it easier, faster and cheaper to launch a rocket, making technology that relies on this more accessible to everyday users,” he says.

Dr Hann adds that the research has far reaching applications.

“Philipp’s research has direct application to providing better control of liquid fuel orbital rockets including removing the need for heavy baffles and allowing launches in a greater range of weather conditions. It also has application for ship-to-ship docking in the ocean and potentially developing better control systems that handle sea-ice interactions for ships in polar regions.”

Philipp was the UC Thesis in Three 2017 winner and represented UC at the Asia-Pacific competition in Brisbane, Australia, in late 2017, where he placed in the top ten. His presentation compared his research into the effects of rocket fuel movement to walking with a cup of coffee.