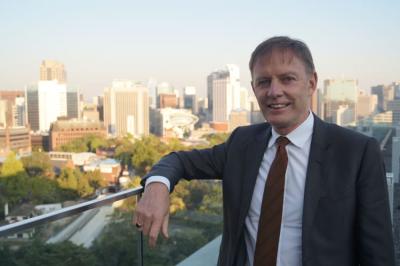 Phillip Turner, New Zealand's ambassador to South Korea, says the fascinating developments in the country are what drew him back into diplomacy. Photo: Sam Sachdeva.

New Zealand's ties with South Korea stretch back over 50 years; diplomatic relations were formally established in 1962, but the relationship dates back to the deployment of Kiwi troops during the Korean War eports Sam Sadcheva for Newsroom.

With the country established as New Zealand’s sixth-largest trading partner, and NZDF troops still helping to enforce a ceasefire on the Korean peninsula, it’s no surprise Foreign Affairs Minister Winston Peters this year described the two countries as “natural partners in the Asia-Pacific”.

Yet talking to people on the ground in Seoul, some feel there is more that can be done to tighten the bilateral ties.

Phillip Turner, New Zealand’s ambassador to South Korea, is a relatively recent arrival: he was lured to the post earlier this year after 18 years working for Fonterra, and before that diplomatic postings in Tokyo and Brussels.

Gesturing out the window to the Seoul cityscape, Turner is clear about why he was drawn back to the public service.

South Korea is at an important stage in its economic and social development, he says, shifting from a country playing catch-up to one which now must transition to a mature economy.

Te Papa digital chief one of 15 women in top group