Bill English will be confirmed as New Zealand Premier. 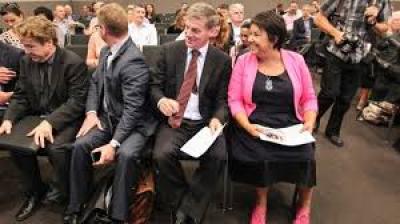 Bill English will be the first farmer prime minister since Jim Bolger.

In selecting him for the top slot the National Party reinstates and restores a line which gave the appearance of becoming extinct.

Mr English will remain as prime minister at least until after the next general election.

With the Brexit/Trump syndrome in such recent memory the National Party will not make the mistake of assessing Mr English’s electoral popularity or otherwise prior to the 2017 general election on the basis of media opinion or poll samplings.

Mr English’s party branding as a farmer removes him from the now suddenly despised class of professional politician.

It is a breed that has now become especially vulnerable.

Populist, media-friendly, and extremely wealthy gadfly Gareth Morgan hovers in the wings promising to swat the category with the most effective instrument at hand, such as a new political party.

In the event, though Mr English, who is actually of Irish lineage, looks like a farmer and usually sounds like one. But his non-career politician credentials do not stand up to all that much scrutiny.

His time devoted to the family farm in Dipton was fairly brief.

It was sandwiched between Otago University where he earned a degree in commerce and Victoria University (English literature) before he began ascending the politico-administrative ladder back in Wellington as a policy analyst with the Treasury department.

The clue to Mr English’s seamless transition from trusted lieutenant to prime minister is the unqualified and public support from his long time boss, John Key himself.

Mr Key will have run the numbers on Mr English before his surprise announcement of his own resignation as premier.

It is the appointment though of Mr English’s deputy prime minister that will present the clearest view of the National Party line of succession.

The importance of this pick was underlined in the unusual-purpose press conference suddenly called by government transport minister Simon Bridges.

The National Party has a horror of things like primary campaigns and other such public personal preferment promotional devices.

So Mr Bridges had to weigh this up before calling his self-nominating press conference for deputy premier .

It was convened in order to notify the public that his hat was very much in the ring .

He knows that in the deputy premiership resides the post-Bill English leadership of the National Party.

The opening could be next year.

Or it could be much, much later.

Nobody doubts that should Mr English lose the 2017 general election, which seems unlikely, but given Brexit/ Trump, is nonetheless possible, the leadership will fall upon Judith Collins.

Mrs Collins MP shares with the late Margaret Thatcher, another non-career politician, a pre-political profession as a tax lawyer.

More in this category: « John Key Fades Away-– a Market Trader Quits his Position at The Top NZ Premier John Key IMF Managing Director Prospect. »
back to top
May 16, 2018