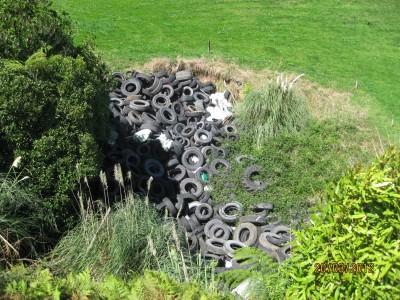 The need for these initiatives is being highlighted by a large site near Otorohanga now not able to take any more used tyres, said investigation and incident response manager Patrick Lynch.

“Council monitoring of a large storage site near Otorohanga has recently determined that no more tyres can be placed there until the site can properly manage their environmental risks. The operator there has received a formal notice to that effect.”

Due to a lack of uses for large volumes of old tyres this facility has been put in a position of stockpiling, resulting in hundreds of thousands of tyres now being on the site, Mr Lynch said.

In recognition of the environmental risk that large tyre piles pose, the Ministry for the Environment has announced that they will be putting in place a national environmental standard later this year to manage the storage and stockpiling of end-of-life tyres. All tyre storage facilities will need to be compliant with this standard.

“We know that central Government is also working hard to develop solutions for how to cope with the four million end-of-life tyres that New Zealand produces annually. In the meantime, it is the responsibility of anyone holding large amounts of old tyres to ensure they are managed safely and disposed of through appropriate collection facilities or landfills,” said Mr Lynch.

Meanwhile, the Waikato Mayoral Forum is supporting the efforts of the regional council and others to find solutions for dealing with end-of-life tyres at a national level.

Mr Lynch briefed the forum – which includes mayors and the regional council chair – at a meeting in Hamilton this week. It subsequently passed a motion of support for a New Zealand-wide approach.

“This is an important issue and it’s great to see the collaborative efforts going into addressing it,” said forum chairman Alan Livingston.