A high speed travel network concept connecting London to Krakow in just one hour and ten minutes, and passing through Brussels, Cologne, Frankfurt and Prague, 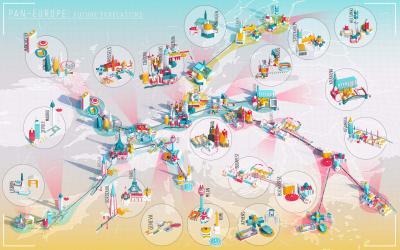 Bartlett School of Architecture graduate Cassidy Reid has designed a concept for a high-speed transport network based on Hyperloop to create infrastructural and cultural corridors across Europe, and shrink travel time between cities.

Connecting London to Krakow in just one hour and ten minutes, and passing through Brussels, Cologne, Frankfurt and Prague, Reid's Pan-European Corridor network leverages newly developed Hyperloop technology to make Europe's cultural corridor easily commutable while also helping to connect deprived communities that have been "left behind" by globalisation.

Hyperloop is the vision of entrepreneur Elon Musk, the founder of Tesla Motors, PayPal and space exploration company SpaceX. The system employs mag-lev — the same technology that is used by high-speed trains in Japan – in which the electromagnetic levitation of the train means there is no friction, unlike traditional trains that run on tracks.

Musk, who first unveiled the concept for Hyperloop in 2013, later open-sourced the technology and is no longer directly involved in its development.

In Reid's Hyperlink masterplan, the corridor's most populous and diverse terminus would be located in London. Integrated into a bridge on the River Thames, the high-speed twelve-track terminal is designed to "evoke a space-bending feeling of connectivity between other European major cities".