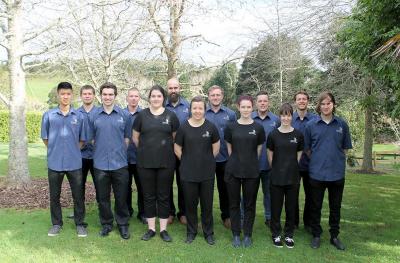 The NZITP Skills Team is selected from participation at the 2016 WorldSkills New Zealand National Competition and the 2016 Master Electricians Challenge, and subsequent on-going performance evaluation. They have been undergoing intensive training with the assistance of their respective employers and skill experts over the past few months.“We have a great team and participating in the WorldSkills International Competition in Abu Dhabi will be an invaluable experience for them. They have increased their work skills, but just as importantly have grown as individuals,” says Malcolm Harris, CEO of WorldSkills New Zealand.

Prior to selection, these competitors participated in international competitions in China and Australia. Hunter Turner and Sarah Browning won bronze medals in Shanghai, China; while Logan Candy and Chabb Chia received medallions of excellence.

Nicholas Todd was recently awarded Apprentice Chef of the Year at the 2017 NZ Hospitality Championships held in Auckland last month. Kimberley de Schot won six silver medals for the restaurant service competitions of the Hospitality Championships. “We are very happy with the depth of talent attending this year’s international skills competition,” says Harris. “I believe these young, talented New Zealanders will encourage others to take up skills careers and develop their skills through WorldSkills competitions.”

He adds that “We will also be supported by a delegation from NZ Industry Training Organisations and Institutes of Technology, who will attend the competition and the WorldSkills Conference, which will focus on ‘Skills Strategies for a Globalised World’, as well as take advantage of the significant networking opportunities.”

More in this category: « WOMAD NZ wins ‘Best National Event of the Year’ at the 2017 New Zealand Event Awards Looking for the world's best bricklayer and most perfect plumber at Abu Dhabi's skills Olympics »
back to top
Jun 18, 2018