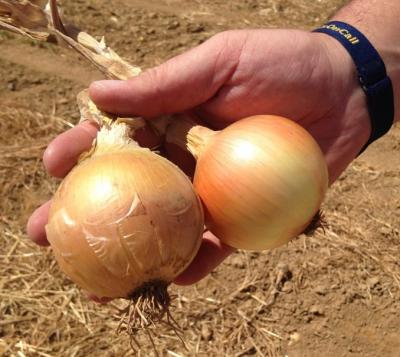 Dr Yossi Shapiro, Global Breeding Director for Large Seed/Root & Bulb/Brassica crops at Monsanto Vegetable Seeds cut the ribbon on Wednesday as part of the Seminis Onion Innovation Day. Visiting from the United States, Dr Shapiro said it was an honour to officially open the station.

“Our investment in the new station demonstrates Seminis’ long-term commitment to Australian and New Zealand onion growers and to developing onion varieties that meet their needs and suit local conditions,” Dr Shapiro said.

Over 40 growers from Australia and New Zealand attended the innovation day, along with key members of the global Seminis onion breeding team who travelled to New Zealand from the USA, Brazil and South America.

The Innovation Day gave growers the opportunity to see new Seminis hybrids and hear from the experts on where breeding efforts will be focused in future. Growers in attendance were impressed by Seminis’ investment at the station, with many commenting on the quality of facilities on-site and the pipeline of new hybrids Seminis is developing, with root disease resistance and storability improvements receiving thumbs up.

Local growers were particularly impressed by the wide planting window of the new early maturing variety SVNH1752, which will offer greater flexibility in sowing schedules. New variety Currawong was also on show. Currawong is a high yielding, first early variety with resistance to Fusarium Basal Rot and Pink Root. SV7030NS, an early red hybrid with pink root and fusarium resistance was another stand out, particularly as it has a very high percentage of single centres.

In addition to exploring new varieties, attendees were treated to presentations from Dan Bloomer on precision agriculture and horticulture as well as a field mapping drone demonstration by Will Bignell. Visiting Australian growers also visited leading onion grading and packing facilities in the Pukekohe region.