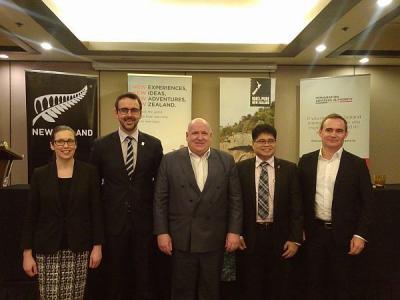 New Zealand Ambassador to the Philippines David Strachan expects stronger ties between his country and Cebu as the two parties further explore opportunities in trade, tourism and education.

At a time when the people-to-people links between New Zealand and the Philippines are burgeoning, Strachan led an 11-strong New Zealand delegation to Cebu to look into potential areas of collaboration.

“We continue to strengthen our ties and explore partnerships that would be beneficial for Cebu and New Zealand,” he said in a roundtable discussion with local media at the Cebu City Marriott Hotel last Friday.

According to Strachan, 80 percent of New Zealand exporters are small and medium enterprises who could be the right match for Cebu-based entrepreneurs.

He said New Zealand is exploring potential investments on food and beverage, wood processing and furniture as well as information technology innovations.

Aside from the BPO sector, he said New Zealand is also looking for collaborative projects in renewable energy, especially since the country is known for geothermal power sources.

He added that Philippine companies are also investing in firms in New Zealand, particularly those involved in food and food processing.

New Zealand boasts of a large Filipino community, with more than one percent or about 6,000 of the country’s population being Filipinos and making it the fastest growing Asian community there.

They expect more Filipinos to travel to New Zealand as Philippines Airlines is set to launch a non-stop service between Manila and Auckland starting December.

“This decision by PAL would inject greater momentum into the fast growing two-way tourist flows,” he said.

Around 28,000 New Zealanders travel from New Zealand to the Philippines while 23,000 Filipinos travel to New Zealand every year, mostly for business, incentives, as well as visiting family and friends.

He said that more than 1,000 students have registered for the New Zealand Education Fair hosted by Golden Summit Immigration Consultancy held at the Cebu City Marriott Hotel last Oct. 7.

“Filipinos pursuing their education in New Zealand are learning from some of the best education institutions in the world. They earn degrees that are internationally recognized. This gives them an advantage in pursuing their careers in the Philippines or elsewhere around the world,” Laxon said.

Year to date, the number of Filipino students choosing to study in New Zealand universities has risen by 35 percent in 2017 compared to the same period last year.

The popular degree programs among Filipinos, Laxon said, are those related to management and commerce as well as health studies, animation, cyber security and ICT.