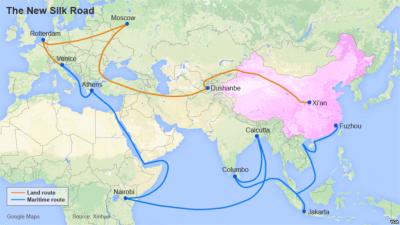 As Donald Trump whips the world into a frenzy with his tweets, China is plotting a trillion-dollar global trade revamp which could change everything reads an article in The NZHerald.

It's being dubbed the "New Silk Road" which could redefine global trade and mark a tipping point for a new Asian century.

So far, 68 countries including New Zealand have signed up to the President Xi Jinping's "One Belt, One Road" (BRI) project, but it's left Aussie politicians divided and scratching their heads, according to an international relations expert.

"I don't think the government has done a great deal of thinking about this," Australian National University's Dr Michael Clarke said.

"But, I've heard from my contacts in government that there is a very definite divide between the security agencies who have strategic concerns and the departments of trade and agriculture, which are looking at BRI as a big economic opportunity for Australia."

This was backed up today, with the ABC reporting that the Australian heads of the immigration and defence departments told the Turnbull Government earlier this year not to join BRI.

However, the Department of Foreign Affairs and Trade were reportedly broadly in favour of joining.

Beijing's massive plans, which were first unveiled in 2013, involve the reviving of an ancient land and ocean silk trade routes.

It has already spent billions of dollars on new infrastructure projects for roads, railways, ports and maritime corridors.